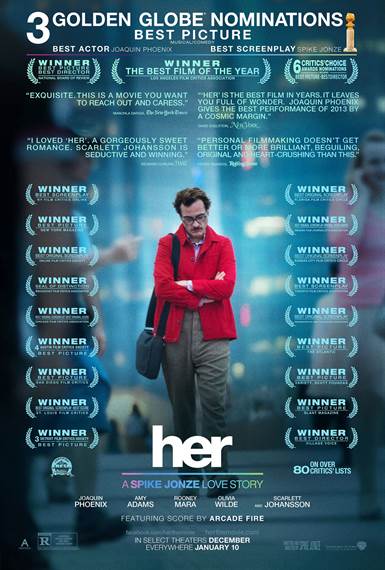 Purchase   DVD/Blu-ray/4K UHD
One of the better features at the movies "Her" has been released wide after a short limited release that qualifies it for the Oscar race.  The Sci-Fi comedy/drama that takes place in the future uses some of the phone knowledge we have today adding many twists on the potential of our present day communications.  With a brilliant performance by Joaquin Phoenix the film should be on every film buff's list.

Set in the future the film centers on Theodore Twanby a conflicted guy who separated from his wife.  He writes letters for a greeting company and he's content with that profession.  He's been offered blind dates from his best friends, but for the time being he's happy with phone sex, although it's becoming a little too quirky for him.

One day while walking through a subway station he sees an ad for a new kind of companionship. It's an Artificially Intelligent Operating System that's actually an intuitive entity that listens to you, understands you and knows you.  It's not just an operating system, it's a conscientiousness companion called OS1. After toying with the idea he decides to try it out.  What he gets is Samantha (voiced by Scarlett Johansson) as his personal assistant, secretary and someone he can talk to about anything at any time of day or night.

When he starts getting a little too close to his new electronic friend, he starts to fall in love with her. Director/writer Spike Jonze keeps his story light, romantic and intriguing using Phoenix to become his Theodore.  Phoenix puts on a very good show working with the voice from a computer that's physically intangible yet becoming a real person in his mind.  The original premise must have been a "What?" to the producers of the film until they saw it up on the big screen.  Jonze by far has one of the best films of 2013 and the most imaginative by far.

It's really not been that long since Joaquin Phoenix announced his retirement in 2008 following the film "Two Lovers".  In 2010 he, along with Casey Affleck,made a return documentary called "I'm Still Here" in which Phoenix crawled back onto the big screen showing he had made a big mistake. And, after watching "Her", I am very glad he's back.  His performance as Theodore is brilliant and deserves a nod for an Oscar.  Showing many moods and personality changes from lackadaisical and depressed, then happy and in love, he's the perfect actor for this role.

The science fiction story looks quite credible considering the changes in what our cell phones will do.  Right now you can ask your phone to dial, check email, write a text message, ask it questions and in some can give you face to face conversations.  That's only the tip of the iceberg when you consider the numerous APPs that are available today.  I don't know if we will ever have Artificially Intelligent Operating Systems that will replace loved ones who have passed away or someone to keep you company while in seclusion, but it's for sure that the way technology is progressing it's not that far in the future.  Kind of fun to think about it anyway and that's another reason to see Her.

"Her" has been rated R by the MPAA for language, sexual content and brief graphic nudity. Be cautious when deciding to allow immature children see the film as it does have some scenes that are very inappropriate for adolescents.

Purchase a DVD/Blu-ray/4K UHD physical copy of Her today at Amazon.com

Download Her in Digital HD/4K from the iTunes store.

For more information about Her visit the FlickDirect Movie Database. For more reviews by John Delia please click here.

Her images are © Warner Bros.. All Rights Reserved.

Read More Reviews For Her