Phase four of the MCU has been disappointing for the most part and I’m sad to say Thor: Love and Thunder does nothing to dispel that label. 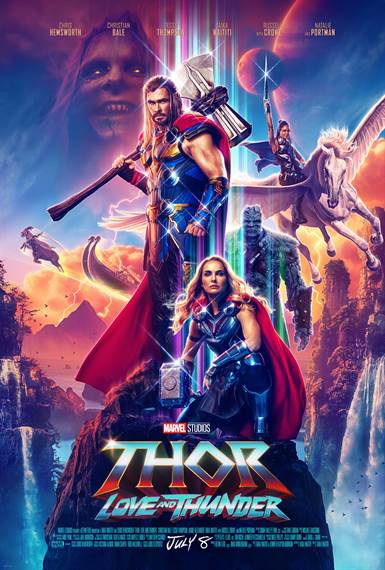 It has been just over a decade since a long-haired, muscled Thor graced movie screens as part of phase one of the Marvel Cinematic Universe.  It was the fourth film to be released and introduced audiences to the Asgardian God of Thunder, based on Norse mythology.  Fast forward to 2022 and two dozen films later (plus a global pandemic), Thor: Love and Thunder makes its way to theaters just in time for the holiday weekend.  With a blending of new villains and old favorites, this film makes one wonder...when did Thor becomes such a buff oon?

When we catch up with Thor (Chris Hemsworth; Extraction), he is hanging out with the Guardians of the Galaxy, helping them save the Universe.  However, it quickly becomes obvious things aren't quite right with him.  If one wouldn't know any better, they would think he was suffering from a mid-life crisis.  However, upon hearing of Gods being murdered, he decides he must figure out what is happening and try to help stop it.  He reunites with Valkyrie (Tessa Thompson; Creed) and Korg (Taika Waititi; Free Guy) and discovers they are fighting Gorr, The God Butcher (Christian Bale; The Dark Knight).  He also learns that Jane Foster (Natalie Portman; The Black Swan) has gained super powers while she is wielding his hammer, Mjolnir.

Hemsworth was a great casting choice back in 2011 and that has not changed in ten-plus years.  With his disarming smile, devastating good looks, and smooth, Australian accent, he has always embodied the character, that seems to have changed and morphed over time.  Thompson embodies Valkyrie and the two actors work well together.  Interestingly, unlike their characters in the Marvel films, their pairing in Men In Black International was awkward.

Portman revises her role nicely and I, for one, am glad she chose to return instead of having her placed by a different actress.  Russell Crowe (Gladiator) portrays Zeus but does so flippantly and sounds much more Italian than Greek.  However, Bale as Gorr is incredible, though I would expect no less from him.  He is menacing and visually grotesque giving Gorr an air of creepiness.

Unfortunately, there is something glaringly wrong with the film and it negates all of the good parts of the movie.  In Thor,  the part was well written and combined a serious plot with some well-placed humor.  Even in Thor: The Dark World there was quite a bit of drama with some laughs.  However, Thor: Ragnarok and now Thor: Love and Thunder show a different personality than before.  In theist two films, Thor is made to seem as if he is an unintelligent, simple-minded, dope who is the butt of jokes more often than is necessary,

With a mixed bag of special effects and Hemsworth portraying Thor as an idiotic moron, Thor: Love and Thunder is probably the weakest of the Thor four movies.  He comes across as a stereotypical, blonde, airhead which is definitely a departure from the original Thor movie.  Conversely, the soundtrack is filled with heart-pounding songs that give the movie a little bit of respect, especially if you are a Gun 'n Roses fan!

Overall, phase four of the MCU has been disappointing for the most part and I'm sad to say this film does nothing to dispel that label.  I think it is time for Marvel to be done with the recycled superheroes and to look for a new story to tell.

Listen to the Thor: Love and Thunder soundtrack on Apple Music.