Bullet Train is one ride you want to hop on and take it all the way to the end of the line. You won’t be disappointed. 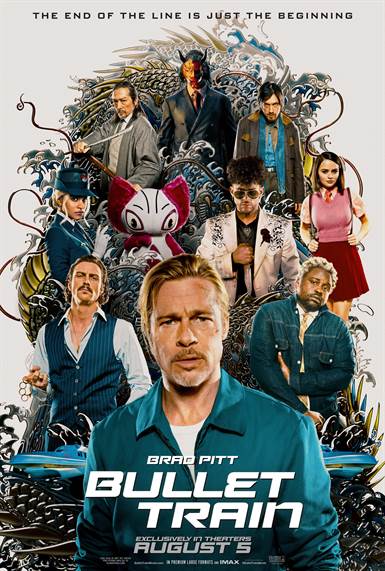 The first, successful high-speed railroad train debuted in Japan in 1964.  Dubbed "The Bullet Train", it could travel at 159 miles per hour, delivering passengers to their destinations in much less time than it would previously take.  Over time, these trains have become even faster and more advanced.  As they speed through the countryside, almost anything can happen and for director David Leitch (Fast & Furious Presents: Hobbs & Shaw) it does.  Based on the 2010 Japanese novel Maria Beetle (Bullet Train in the United States), the film, Bullet Train, put a group of assassins together, giving the train's nickname a whole new meaning.

Ladybug (Brad Pitt; Once Upon a Time in Hollywood) is a criminal for hire who specializes in "grab and go" assignments.  Lately, he has been having an identity crisis and has been working with a therapist to understand his anger impulses and look instead for peaceful resolutions.  When he fills in for another criminal on Japan's Bullet Train, he ends up getting more than he bargained for.  What should have been an easy job becomes an interwoven web of complications with other forces working in opposition to Ladybug obtaining his goal.  However, what initially seems like some bad luck "coincidences" reveal themselves to be anything but.

There are so many talented actors cast in Bullet Train that it is difficult to single one or two of them out.  Besides Pitt, Joey King (The Conjuring) plays Prince, a sweet and innocent-looking young lady who hides a dark secret.  Aaron Taylor-Johnson (Kick-Ass) and Brian Tyree Henry (Godzilla vs. Kong) portray the tag team brothers, Tangerine and Lemon,  who are tasked with bringing back a son and the ransom money to a father who is one of the most ruthless mob bosses in Japan.  Bad Bunny (as Benito A Martínez Ocasio) and Zazie Beetz portray minor roles that are no less memorable than the others and Andrew Koji (Fast & Furious 6) is great as the assassin seeking revenge.

Pitt has transitioned well in the last few years from the pretty-faced young man to the seasoned actor who proves he can handle both drama and comedic scenes equally well.  Taylor-Johnson and Tyree Henry are perfectly matched and offer stellar performances.  King offers an example of what talent lies within the new, young Hollywood set and the ensemble makes the film even better than the script and action could do on their own.

While there are moments when the effects are less than perfect, the majority of the scenes are well done.  The fight choreography is so good it would make John Wick jealous.  Flips, jumps, and props found on the train used as weapons affirms that anything can happen on the Bullet Train.  Leitch masterfully navigates all of these moments and weaves them between witty dialogue and complicated plot lines to formulate an engaging film that doesn't slow down from beginning to end.

The original story and the screenplay offer a sense of familiarity while introducing the audience to a plot that feels fresh and new all at the same time.  The banter is witty and well placed and the movie has so many twists and turns it will keep the viewer engaged for the full two hours.  Of course, just when you think the movie couldn't be more fun, along come the well-placed cameos to the frivolity of it all.

Bullet Train is one ride you want to hop on and take it all the way to the end of the line.  You won't be disappointed.

Download Bullet Train in Digital HD/4K from the iTunes store.

Listen to the Bullet Train soundtrack on Apple Music.