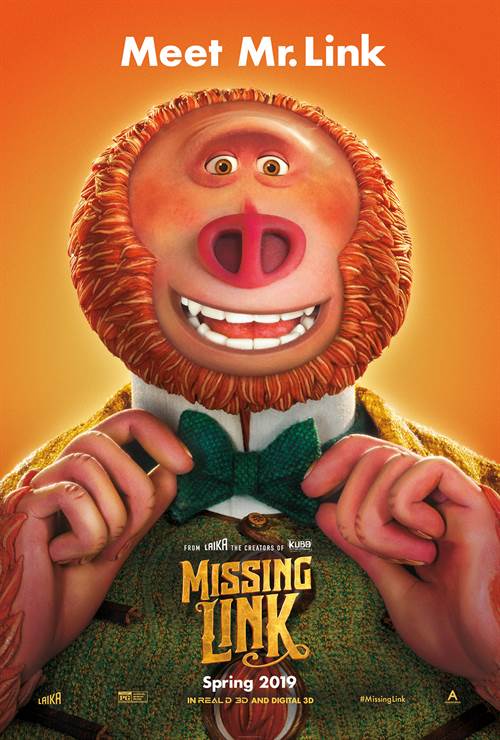 This April, meet Mr. Link: 8 feet tall, 630 lbs, and covered in fur, but don't let his appearance fool you... he is funny, sweet, and adorably literal, making him the world's most lovable legend at the heart of Missing Link, the globe-trotting family adventure from LAIKA. Tired of living a solitary life in the Pacific Northwest, Mr. Link recruits fearless explorer Sir Lionel Frost to guide him on a journey to find his long-lost relatives in the fabled valley of Shangri-La. Along with adventurer Adelina Fortnight, our fearless trio of explorers encounter more than their fair share of peril as they travel to the far reaches of the world to help their new friend. Through it all, the three learn that sometimes you can find a family in the places you least expect.

Download Missing Link in Digital HD/4K from the iTunes store.


Win Complimentary Passes To An Advance Screening of Laika Studio...  02/04/2019 10:42 EST
If you enjoy stop motion animation and are a fan for Laika Studios past movies including Coraline, Boxtrolls and Kubo and the Two Strings, then you won't want to miss their latest release, MISSING LINK.  United Artists Releasing, in conjunction with FlickDirect, wants to give some lucky winners the opportunity to see an Advance Screening of the movie before it is released nationwide on April 12, 2...  More>> 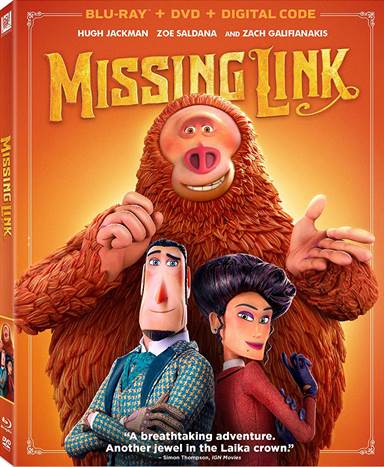 Laika Studio, who brought us, Coraline, ParaNorman, The Boxtrolls, and Kubo and the Two Strings, has brought us another impressive feature titled Missing Link, starring the voices of Zach Galifianakis (The Hangover series) and Hugh Jackman (The Greatest Showman). The film hit theaters in April of 2019 and now you can own this title on Blu-ray.

An explorer named Sir Lionel Frost (Jackman) is desperately trying to get into an exclusive explorers club and spends his time searching for elusive creatures. His interest is piqued after he receives a letter talking about the existence of Sasquatch. He decides to challenge Lord Piggot-Dinceb (Stephen Fry; V for Vendetta) to a bet that if he finds the Sasquatch he will gain admittance into the society. He then begins his adventure in the American North West to find this mystical creature.

Sure enough, he does find the Sasquatch. In fact, the creature is the one that wrote the letter! He wrote to Frost in order to seek help finding his cousins, the Yetis. Now, they embark on a journey together, along with Adelina Fortnight (Zoe Saldana; Guardians of the Galaxy), who has the map of Shangri-La, the home of the Yetis. Along the way, they find out that this journey will be more difficult then they could have imagined, with people trying to stop them at every turn.

Laika studio puts out quality films and this latest feature is no exception. Everything about Missing Link is top-notch. The cast all compliment each other superbly and the visuals of this film are equally impressive.

The resolution of this movie is the standard 1080p with an aspect ratio of 2.39:1 but you would never know it from the detailed animation coming across your television screen.  The picture quality is excellent and, of course, the colors are deep and wonderful throughout.  the DTS-HD Master Audio 5.1 offers a nice mix of dialogue and soundtrack without an artifacting at all.

Extras for this Blu-ray include: Not surprisingly, I really enjoyed this film. It's a great story and something that you could watch with the whole family. Another great Laika addition to the home entertainment marketplace!