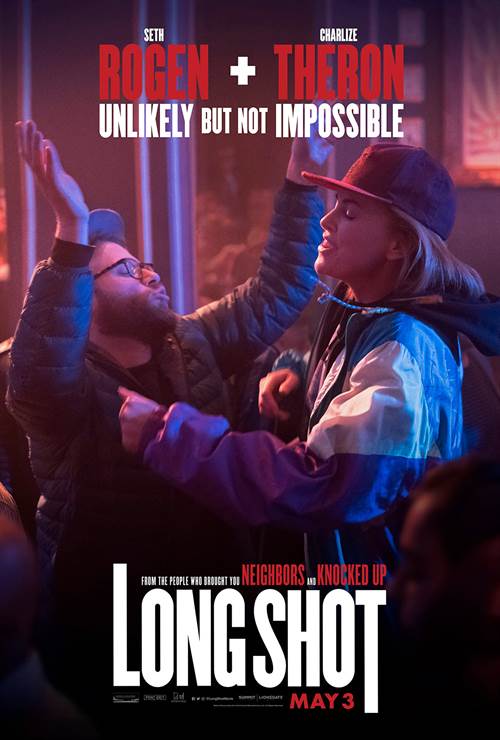 Fred Flarsky (Seth Rogen) is a gifted and free-spirited journalist with an affinity for trouble. Charlotte Field (Charlize Theron) is one of the most influential women in the world. Smart, sophisticated, and accomplished, she’s a powerhouse diplomat with a talent for…well, mostly everything. The two have nothing in common, except that she was his babysitter and childhood crush. When Fred unexpectedly reconnects with Charlotte, he charms her with his self-deprecating humor and his memories of her youthful idealism. As she prepares to make a run for the Presidency, Charlotte hires Fred as her speechwriter, much to the dismay of her trusted advisors. A fish out of water on Charlotte’s elite team, Fred is unprepared for her glamourous lifestyle in the limelight. However, sparks fly as their unmistakable chemistry leads to a round-the-world romance and a series of unexpected and dangerous incidents.

Download Long Shot in Digital HD/4K from the iTunes store.


Get Passes To See An Advanced Screening of Long Shot  24/04/2019 20:33 EST
When one thinks of romantic comedy stars Seth Rogen (Knocked Up) and Charlize Theron (Atomic Blonde) certainly seem like an unlikely pairing. However, they have teamed up for Lionsgate's LONG SHOT and FlickDirect, in conjunction with Lionsgate would like to give some lucky winners the opportunity to see the film on April 29, 2019, in either Jacksonville, Orlando, Miami, Tampa or West Palm Beach be...  More>>

Charlize Theron and Seth Rogen to Receive CinemaCon's Comedy Sta...  25/03/2019 13:52 EST
Mitch Neuhauser, Managing Director of CinemaCon, has announced that Seth Rogen and Charlize Theron will receive this year's "CinemaCon® Comedy Stars of the Year Award." the award will be presented on the evening of Thursday, April 4."Rogen and Theron have been bringing audiences around the world to the theatres for over a decade with some of the most entertaining, inspiring and hilarious films of ...  More>> 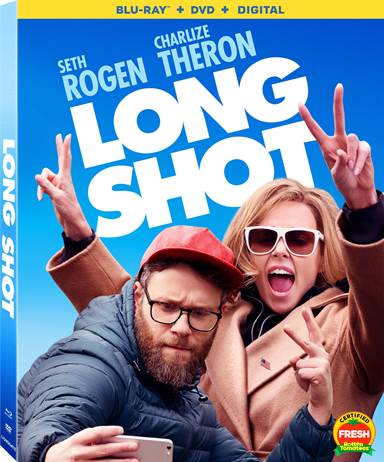 Charlize Theron and Seth Rogen - power couple? One may not immediately think of this duo in such a way but in Long Shot, you are quickly convinced. Released in May 2019 to theatres, this funny and heartwarming film is now available on Blu-ray for your home entertainment collection.

When Brooklyn Advocate journalist Fred Flarsky (Seth Rogan; Knocked Up) finds out his company has been bought out by a media conglomerate, he quits in a fit of rage. The liberal Flarsky finds the new owner of the company, Parker Wembley (Andy Serkis; The Planet of the Apes Series) to be immoral. His best friend, Lance (O'Shea Jackson Jr.; Straight Outta Compton) decides to cheer his friend up by bringing him to a wildlife fund benefit party. This party also happens to be attended by Secretary of State, Charlotte Field (Charlize Theron; Mad Max: Fury Road).

After thinking that she recognizes Flarsky, Field asks to meet him. They soon find out that they used to be neighbors and that she used to babysit him. She decides to help her old friend out and give him a job as her speechwriter for her run as President. As the two work together, they grow close. Unfortunately, Wembly decides to use this against Field and threatens her with publicly humiliating Flarsky unless she goes along with a plan he has a vested interest in. She decides to go along with it, which causes problems with her relationship with Fred.

In this film, Theron gets to showcase her comedic sensibilities, something we don't get to see often enough. She has great chemistry with Rogen and you really root for these two. They are supported by fellow castmembers June Diane Raphael (The Disaster Artist) and Ravi Patel (Transformers), who play Field's assistants, and Bob Odenkirk (Better Call Saul), who has a great cameo as President Chambers.

The 1080p video quality is rather strong on this Blu-ray.  The details are sharp and the and the colors, for the most part, are clean.  There is one scene on a beach at night that seems a little off but it isn't terribly distracting.  The Dolby Atmos audio is average throughout but that seems to showcase the eclectic soundtrack nicely.  The Boyz 2 Men scene offers a decent amount of ambient nice that mixes well with their classic songs.

Extras in this release include:

As a fan of both Theron and Rogen, for me, this movie was a can't miss. I really enjoyed this film and thought they put a nice spin on to a genre of film that can often be very predictable. I also really enjoyed all the bonus footage.