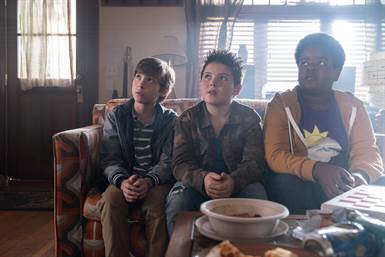 Just how bad can one day get? The creative minds behind Superbad, Pineapple Express and Sausage Party take on sixth grade hard in the outrageous comedy, Good Boys.

After being invited to his first kissing party, 12-year-old Max (Room’s Jacob Tremblay) is panicking because he doesn’t know how to kiss. Eager for some pointers, Max and his best friends Thor (Brady Noon, HBO’s Boardwalk Empire) and Lucas (Keith L. Williams, Fox’s The Last Man On Earth) decide to use Max’s dad’s drone – which Max is forbidden to touch – to spy (they think) on a teenage couple making out next door.

But when things go ridiculously wrong, the drone is destroyed. Desperate to replace it before Max’s dad (Will Forte, The Last Man on Earth) gets home, the boys skip school and set off on an odyssey of epically bad decisions involving some accidentally stolen drugs, frat-house paintball, and running from both the cops and terrifying teenage girls (Life of the Party’s Molly Gordon and Ocean’s Eight’s Midori Francis).

Download Good Boys in Digital HD/4K from the iTunes store.


Get a Free Copy of Good Boys on Blu-ray Combo Pack  28/10/2019 12:57 EST
This past August the world was exposed to three teenage boys on a unique adventure and we haven't been the same since.  GOOD BOYS is the hilariously funny and inappropriate "coming of age" tale that grossed $110 million worldwide.  Before it makes its way to stores on Blu-ray nationwide, Universal Pictures, in conjunction with FlickDirect, want to give one lucky winner the chance to win a Blu-ray ...  More>>

Win Passes For 2 To An Advance Screening of Universal Pictures' ...  05/08/2019 15:08 EST
From the brilliant and warped minds of the people who brought you Superbad, Neighbors and Sausage Party comes to their latest endeavor called GOOD BOYS.  As you can only imagine it will offer the hilarious hijinks of three sixth-graders who ditch school for a day and manage to get into all kinds of trouble.  Before it hits theaters nationwide, Universal Pictures, in conjunction with FlickDirect, w...  More>> 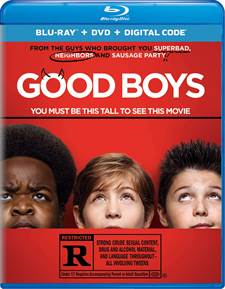 Middle school…the hormones, the bullying, the embarrassing situations that lurk behind every corner.  Walking that fine line between childhood and young adult can be difficult to navigate, which is why there have been numerous films highlighting the trials and tribulations of that tumultuous time in one's life.  Of course, none of these films would be complete without the obligatory humor necessary to make the absurd situations these tweens encounter even more ridiculous.  The latest movie in this genre was this summer's hit Good Boys created by Seth Rogen's production company, Point Grey Pictures. If you laughed out loud the first time you saw it, then you will be excited to learn that it is about to be released on Blu-ray, DVD, and Digital.

Max (Jacob Trembly; Room, Wonder), Lucas (Keith L. Williams; The Last Man on Earth), and Thor (Brady, Noon; Boardwalk Empire) are three best friends that are sixth grades…low men on the totem pole in the jungle that is middle school.  So when one of the popular kids in their grade, Soren (Izaac Wang), invites Max – and by extension – Lucas, and Thor to a party, they are eager to go.  There is only one problem…it's a kissing party and none of them know how to kiss.

The three boys decide to spy on their teenage neighbor, Hannah (Molly Gordon; Booksmart), Hannah's boyfriend, Benji (Josh Caras; The Glass Castle), and Hannah's best friend Lily (Midori Francis; Ocean's 8) using Max's Dad's work drone that he has been specifically told he cannot touch.  When Hannah and Lily manage to trap the drone, the boys go to them to ask for it back.  The girls say no, not realizing that Thor stole Hannah's purse with drugs in it.  The boys then try to negotiate a swap that goes awry.  With no other choice, the boys raise the money to buy a new drone only to find out the girls got to the store first and bought the drone.  Eventually, Max's dad finds out he used the drone and grounds him but he still manages to go to the party with Lucas and Thor and kiss the girl of his dreams.

The cast, for being so young, is excellent.  Trembly is already a seasoned professional with several terrific performances under his belt.  Williams and Noon are very good counterparts to Trembly and the three of them have a natural chemistry which makes their backstory of being best friends believable.  Gordon and Francis are also great and balance out the cast well.

The video is presented in 1080p high definition resolution with a 2.39:1 aspect ratio.  Details are sharp and colors are vibrant.  The DTS-HD Master Audio 5.1 offers the standard fair where comedies are concerned.  Dialogue sits comfortably on the center channel and the soundtrack offers ambiance.  The only upgrade comes with the sound of the drone flying overhead.  The combo pack has several short extras that are entertaining.  They include: Unrated Alternate Ending, Unrated Deleted, and Extended Scenes, Boys for Real, Gag Reel, Welcome to Vancouver, A Fine Line, Ask Your Parents, Bad Girls, Guest Stars, and Audio Commentary.

Good Boys is a solid comedy for those that enjoy a certain type of humor.  It is also a must-have for any parent raising a middle school-aged boy as writers Lee Eisenberg and Gene Stupnitsky (Bad Teacher) captured the flavor and essence of this time period in a young man's life perfectly. While it had some funny moments, there were others that just fell flat for me but I am definitely not it's the target audience.

This Blu-ray combo pack will make a great holiday gift for anyone who enjoyed the film in the theater.