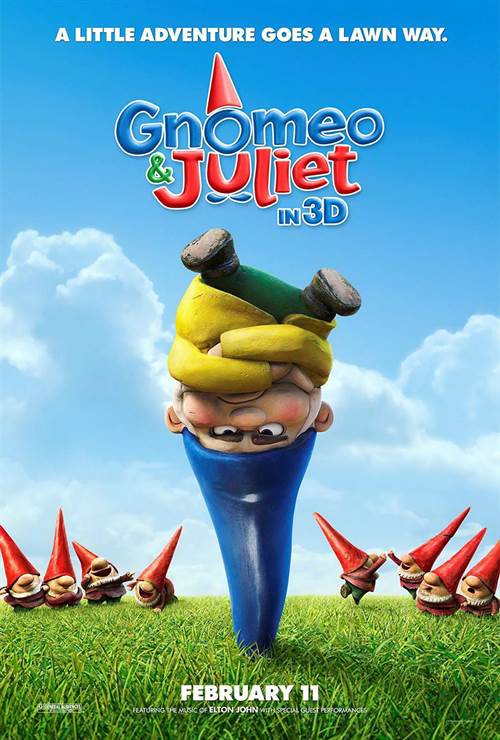 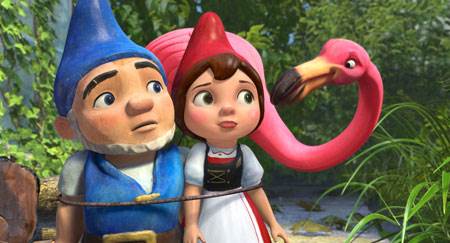 The greatest love story ever told, starring...garden gnomes? In "Gnomeo & Juliet," Shakespeare's revered tale gets a comical, off-the-wall makeover. Directed by Kelly Asbury (co-director of "Shrek 2") and showcasing both classic and original songs by Elton John, the film features the voices of James McAvoy and Emily Blunt as Gnomeo and Juliet, who have as many obstacles to overcome as their quasi namesakes when they are caught up in a feud between neighbors. But with plastic pink flamingos and thrilling lawnmower races in the mix, can this young couple find a happy ending?

Stream Gnomeo & Juliet in Digital HD/4K from the AppleTV store.


Sherlock Gnomes Discovers A Director  05/09/2012 14:29 EST
"Gnomeo & Juliet", last year's 3D Animated Disney film, will be getting a sequel titled "Sherlock Gnomes".  John Stevenson has been hired to direct.The film will be produced by Elton John‘s Rocket Pictures and will be written by Andy Riley and Kevin Cecil.  it will follow the story of the characters from the first film, who enlist the help of a famous detective (who also happens to be a gnome) to ...  More>> 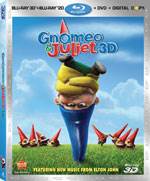 The story is a simple mix of Shakespeare's famous, forbidden love tragedy mapped onto the secret world of animated garden gnomes. If that makes any sense at all to you, you are likely prepared for Gnomeo and Juliet. The story is about the love of blue-gnome, Gnomeo ( James McAvoy) and red-gnome, Juliet (Emily Blunt) with attending voice overs from Jason Statham, Ozzy Osbourne, Patrick Stewart, and others. It is under the helm of Kelly Asbury (Shrek 2), and it is at times cute (how could it not be) and funny enough for the kids, and just maybe clever enough for the grownups. There is a long-standing feud that goes back so far no one remembered how it started, and a race -- and hijinks. There is also the love between the red and blue gnomes (who are not quite as star-crossed as Shakespeare's lovers -- this is a kid's movie. Well, you really should know the story by this time -- even told with garden gnomes and in 3D.

Is it good for the kids – Yes…for teens -- Probably not…for grown-ups who have to watch it with the kids -- not bad. The selling point is probably the voice-cast, and you can imagine all of these people having fun with the show. It didn't electrify me, but it' is an enjoyable kid's movie; and is put together pretty well. Let's talk about what you get by way of the product.

Firstly, you get just about every type of media they can give you. Blu-ray, DVD, Digital DVD, and 3D Blu-ray. They have given up on selling things separately, and that is probably for the best.

Visually you get 1080p, 1.85:1-framed transfer and a muscular 3D world that is trying hard to justify it. The backgrounds are packed and as thankfully, there is little by way of 3D-gimicks – although there is plenty of depth-of field to enjoy. Home Theater 3D is just coming into its own and right now, if you want to show it off, CGI animation is probably the way to go. Gnomeo may not be a "big movie" the way some of the Blu-Ray releases justify their existence by delivering magnificent breath-taking vistas in crystal clear resolution. Gnomeo and Juliet is no "Avatar-style" special effects extravaganza, but it has excellent, mature use of its 3D capabilities; and I might be tempted to use it as an introduction to home-theater 3D for the right audiences!

The audio is DTS-HD MA 7.1 lossless, and it is perfectly fine with Elton John's soundtrack to handle it. I didn't notice a lot of sonic depth of field in Gnomeo and Juliet, but I found it clear and pleasant with no glitches. I also noticed some sound obscuring dialog.

??The extras have an Elton John piece that shows you how he got involved. Some alternate endings: 1) One does not involve them dying of poison, and 2) some alternate scenes. You also get to see Ozzy?Osbourne being cast -- which is worth looking at.

??Over all, Gnomeo and Juliet is a good piece of 3D, CGI children's story telling. It never truly gets beyond it's titular pun; and I feel for its "modest" intents, it doesn't really have to. It isn't great art, but it is a good kid's movie and does the work necessary to keep the person that buys the movie from falling asleep. It hits all of the points it needs to with its technology (3D, good audio, complex CGI modeling), and it has a stellar voice-cast.

Life of The Party