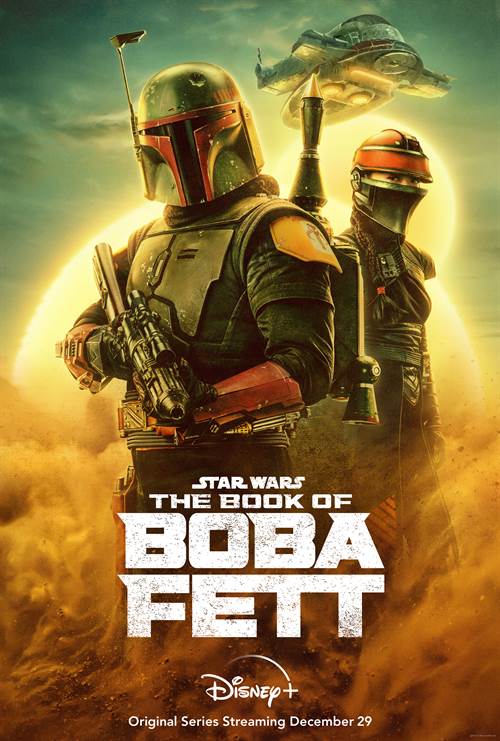 “The Book of Boba Fett,” a thrilling Star Wars adventure teased in a surprise end-credit sequence following the Season 2 finale of “The Mandalorian,” finds legendary bounty hunter Boba Fett and mercenary Fennec Shand navigating the galaxy’s underworld when they return to the sands of Tatooine to stake their claim on the territory once ruled by Jabba the Hutt and his crime syndicate.

The Book Of Boba Fett images are © Walt Disney Pictures. All Rights Reserved.


Book of Boba Fett Red Carpet Premier Postponed  22/12/2021 15:05 EST
Due to the rise of Covid cases, the red carpet premier of Disney Plus' "The Book of Boba Fett" has been postponed."Out of an abundance of caution, we will be postponing the ‘Boba Fett' fan event. It will be relocated to the 8th of February in celebration of the finale," the studio said in a statement.The premier was to take place at the El Capitan Theatre in Hollywood on January 4. "The Book of Bo...  More>>

The Book Of Boba Fett Review 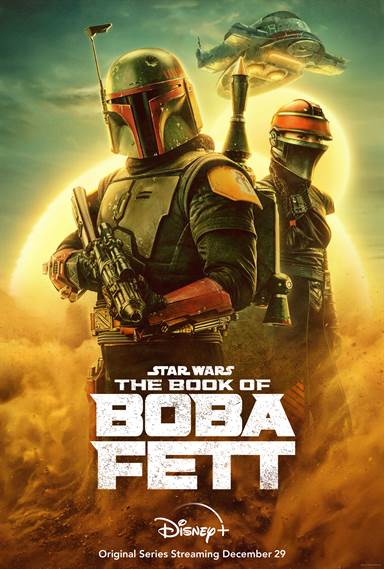 How does a minor character who had four lines of dialogue, consisting of five sentences, and a grand total of six and a half minutes of screen time, become a cult-like favorite who is practically worshipped by fans for almost fifty years?  Honestly, Who the heck knows.  However, Boba Fett (Originally portrayed by Jeremy Bulloch; Octopussy/currently played by Temeura Morrison; Aquaman), from the original Star Wars trilogy is that character and he is the latest to earn his own Disney+, limited series called The Book of Boba Fett.

Even before the show’s debut, teased at the end of season two of The Mandalorian, excitement resonated throughout the Star Wars/Boba Fett community which has only expanded since the first episode debuted on December 29, 2021.  For those who remember, Boba Fett seemed to be all but lost, having fallen into the opening of the Sarlacc (a sand creature that slowly digests its victims over thousands of years).  However, in The Book of Boba Fett episode I, we discover that isn’t true and the bounty hunter managed to survive.  Unfortunately, he was found and captured by the Tusken Raiders who kept him as their prisoner.

This first episode was more establishing the story than it was moving the plot along.  We discovered how Boba survived the Sarlacc, some of his childhood memories, and his time in Tusken servitude.  We also learn that he has taken over Jabba’s territory and, not only receives visitors but sometimes heads out to view his territories and meet those he rules over.

While Jeremy Bulloch passed away a year ago, I’m certain he would have approved of this new series where we learn some of Boba Fett’s back story. Not only does it fill in plot holes and explain how Fett is still alive, but it is done with a talented cast.   It is safe to say Morrison has taken up the mantel and does Boba Fett proud.  Even in slavery, he stands tall and proud, physically, making a statement that says, “I know who I am and what I am capable of, and nothing will change that”.

He is joined by Ming-Na Wen (Agents of S.H.I.E.L.D.) who plays Fennec Shand, a highly trained mercenary/assassin in the bounty hunter’s service.  Wen is no stranger to action sequences, but she is also an excellent actor, and besides Morrison, the two form a formidable team.  However, after the first episode, we don’t yet have a solid list of the other key players in this mini-series or if there even will be recurring characters, other than Boba Fett and Shand.

As with previous Disney shows/movies, the production value for the book of Boba Fett was high and it is obvious little expense was spared.  From costumes to sets and everything in between, the quality of the work shows up everywhere. Even the story is well written.  The audio surrounds the viewer and draws them in which only adds to the experience.

Episode I, however, doesn’t offer much in plot development.  While it pieces together some of Boba Fett’s past, there isn’t a lot to say where the show is going, other than perhaps a war with one of Fett’s territories.  It will be interesting to see what type of storyline is pursued and how it will be resolved within seven episodes.

The Book of Boba Fett has a built-in audience and fans are excited to see what happens, but it remains to be seen if the plot will offer enough to warrant a cliffhanger and a second season down the line.