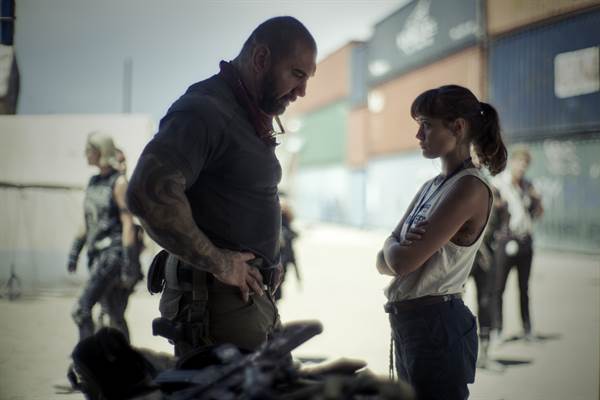 From filmmaker Zack Snyder (300, Zack Snyder's Justice League), ARMY OF THE DEAD takes place following a zombie outbreak that has left Las Vegas in ruins and walled off from the rest of the world. When Scott Ward (Dave Bautista), a displaced Vegas local, former zombie war hero who's now flipping burgers on the outskirts of the town he now calls home, is approached by casino boss Bly Tanaka (Hiroyuki Sanada), it's with the ultimate proposition: Break into the zombie-infested quarantine zone to retrieve $200 million sitting in a vault beneath the strip before the city is nuked by the government in 32 hours. Driven by the hope that the payoff could help pave the way to a reconciliation with his estranged daughter Kate (Ella Purnell), Ward takes on the challenge, assembling a ragtag team of experts for the heist. They include Maria Cruz (Ana de la Reguera), an ace mechanic and Ward's old friend; Vanderohe (Omari Hardwick), a zombie killing machine; Marianne Peters (Tig Notaro), a cynical helicopter pilot; Mikey Guzman (Raúl Castillo), a go-for-broke influencer and Chambers (Samantha Win), his ride-or-die; Martin (Garret Dillahunt), the casino's head of security; a badass warrior known as the Coyote (Nora Arnezeder) who recruits Burt Cummings (Theo Rossi), a slimy security guard; and a brilliant German safe cracker named Dieter (Matthias Schweighöfer). Scott finds an unexpected emotional hurdle when Kate joins the expedition to search for Geeta (Huma S. Qureshi), a mother who's gone missing inside the city. With a ticking clock, a notoriously impenetrable vault, and a smarter, faster horde of Alpha zombies closing in, only one thing's for certain in the greatest heist ever attempted: survivors take all.

Army of The Dead images are © Netflix. All Rights Reserved.

Army of The Dead Theatrical Review 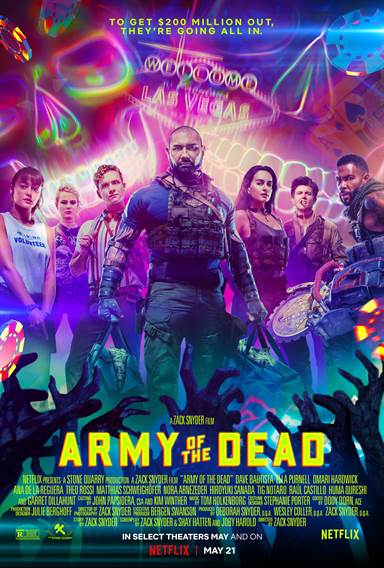 What would happen if you took Ocean's Eleven and threw in a Zombie apocalypse?  I'm guessing it would look something like Army of the Dead – not to be confused with the 2008 movie of the same name.  The components are all there…a flashy casino, a vault full of money, and a TON of zombies.  However, these aren't just any zombies, they are smart, strong, and very fast, making them much more difficult to kill.  Would you venture into their "nest" (a.k.a. Las Vegas) for a hefty payout? How much money would your life be worth to you?   These are all very good questions you should ask yourself before viewing Army of the Dead because, by the end of the film, your answer may change.

One evening on a lonely stretch of highway, just outside of Las Vegas, a newlywed couple crashes into a military convoy transporting a top-secret item that is locked up in a steel cage.  The crash breaks the cage and out comes a man…but not a man.  He attacks the soldiers transforming them into zombies.  As their numbers grow, people are either turned or rescued and begin living outside the "nest".  After several years, the zombies are contained inside what used to be Las Vegas, and life surrounding it goes back to somewhat normal.

Scott Ward (Dave Bautista; Guardians of the Galaxy) has lived through the zombie nightmare for years and now works as a line cook.  When billionaire Tanaka (Hiroyuki Sanada; The Wolverine) approaches Ward about pulling off the casino heist, Ward is initially reluctant but eventually realizes he can start a new life with his cut of the money.  He assembles a team of people he trusts and some experts who are necessary to successfully complete the job.  The group then meets Tanaka before setting off into zombie territory.

Director Zach Snyder (Man of Steel) is a hot commodity right now, so Netflix was smart to cash in on his current notoriety and release Army of the Dead.  After his vindication with the recent release of a certain superhero, four-hour-long, six-part saga, Snyder has become somewhat of a minor legend.  Army of the Dead will no doubt benefit from this but, while it is decent, it is not his best work.  Having said that, the blood and gore and a number of well-shot scenes remind audiences often that this movie is most definitely a Zach Snyder creation.

Bautista is good as the lead and he certainly has the right look to be cast as a tough mercenary but the actors to watch are the women.  Maria (Ana de la Reguera; Narcos) is Ward's friend and fellow mercenary and she can match Bautista in every violent action scene.  Nora Arnezeder (Safe House) plays Lily the coyote who navigates the group through zombie territory and she is definitely a badass.  Tig Notaro (Instant Family), who was a last-minute replacement for Chris D'Elia, portrays Marianne Peters, a helicopter pilot who has some of the best lines in the entire movie.  Honorable mention belongs to Omari Hardwick (Power), Matthias Schweighofer (The Most Beautiful Day), and Raul Castillo (We the Animals) for some terrific moments and well-placed lines.

Army of the dead is a decent movie in the action / horror categories, with the emphasis on the former.  There is quite a bit of blood and gore and Snyder exploits them to their fullest, with guts and pieces of skin and bone exploding when a zombie gets shot in the head.  Snyder's biggest problem as a filmmaker though is his inability to edit.  Army of the Dead runs for two hours and twenty-eight minutes and at least twenty-five of those minutes were completely unnecessary and should have been left on the cutting room floor.

No one can deny Snyder's ability to make a well-staged, thoroughly thought-out action film but he does need to reign it in sometimes.