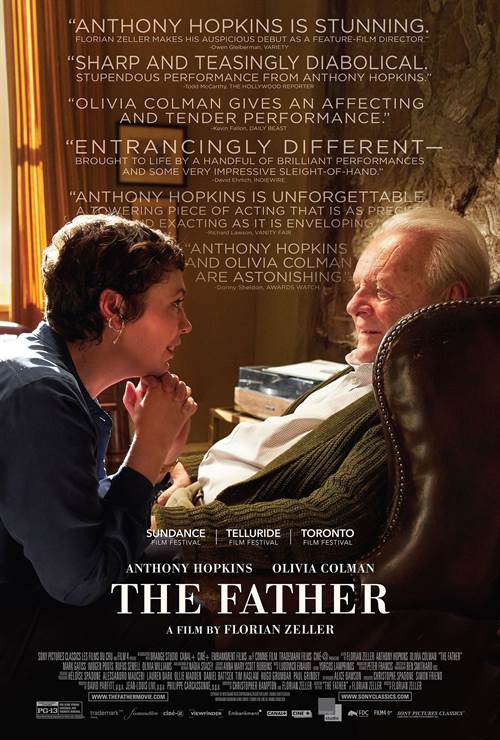 Anthony (Academy Award Winner, Anthony Hopkins) is 80, mischievous, living defiantly alone and rejecting the carers that his daughter, Anne (Academy Award and Golden Globe Winner, Olivia Colman), encouragingly introduces. Yet help is also becoming a necessity for Anne; she can't make daily visits anymore and Anthony's grip on reality is unraveling. As we experience the ebb and flow of his memory, how much of his own identity and past can Anthony cling to? How does Anne cope as she grieves the loss of her father, while he still lives and breathes before her? THE FATHER warmly embraces real life, through loving reflection upon the vibrant human condition; heart-breaking and uncompromisingly poignant -- a movie that nestles in the truth of our own lives.

Stream The Father in Digital HD/4K from the AppleTV store.

Listen to the The Father soundtrack on Apple Music.

The Father images are © Sony Pictures Classics. All Rights Reserved. 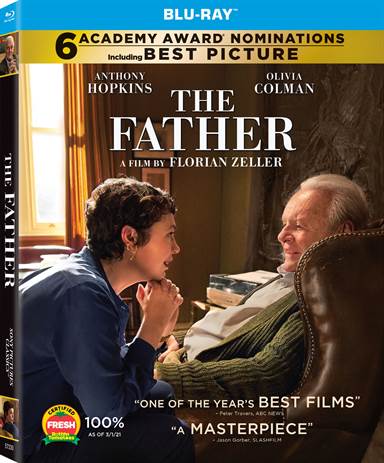 Dementia is a general term categorized by the impaired ability to remember, think, or make decisions that interfere with doing everyday activities.  There are approximately fifty million people worldwide who have dementia and roughly ten million new cases that are diagnosed each year.  Dementia is devastating for the person suffering from it, but it is also difficult for their loved ones and caregivers, as well.  Watching someone you love become confused or forgetful or not recognizing their loved ones is heartbreaking and being unable to do anything about it gives one a sense of helplessness.

The Academy Award-winning film, The Father, aptly documents the hardships encountered by the patient and their family with a realistic portrayal of their struggles and anguish. Starring Sir Anthony Hopkins (The Silence of the Lambs) and Olivia Colman (The Favourite), the movie is now available for purchase on Blu-ray.

Anthony (Hopkins) doesn't go out much.  He mainly stays in his flat and sees his daughter, Anne (Colman), who comes to visit him often.  At times he is unsure of his thoughts and his surroundings.  He can't always recognize faces which can be disconcerting and scary.  Anthony insists he is living in his own apartment but actually, he stays in Anne's flat with Anne and her partner, Paul (Rufus Sewell; Dark City).  When Anne and Paul decide to live in France, Anne hires a caregiver for Anthony named Laura (Imogene Poots; Fright Night).  Eventually, Anthony becomes belligerent and ends up in a nursing home where Anne comes to visit him on occasional weekends.

Making his feature film directorial debut, writer Florian Zeller (Floride) gives the audience an intimate look inside this complex condition and how it affects not only the patient but everyone around them.  Known as a brilliant playwright and having won numerous theatrical awards, he has an eye and sensibility for dramatic shots that work beautifully.  They help make the audience more than just a silent observer.

Of course, the success of the film must also be attributed to the brilliant performances of Hopkins, Colman, and Sewell.  Colman once again proves why she is an Academy Award-winning actress as she makes the viewers feel her pain and anguish over her father's fragile state.  Sewell does a good job trying to be patient while increasingly becoming frustrated with Anthony and the situation they are all in.  While controversial, it is easy to see why Hopkins won the Academy Award.  His portrayal of a Dementia patient is beautifully acted while simultaneously heartbreaking to watch.  I don't know that another actor could have played it as well.

The Blu-ray video is a 1080p transfer of a digital master and the quality shows.  The details are clean and crisp from facial expressions to clothes and furnishings.  There is very little graininess to speak of.  The DTS-HD Master Audio 5.1 is solid, if uneventful.  The dialogue sharp and clear and the subtle score is unintrusive.  Most of the audio sits in the front speaker with not a lot of surround sound.

Sony decided to package this film without a DVD disc or Digityal HD code which is a little disappointing.  The minimal extras include Perception Check: Portrait of The Father, Homecoming: Making The Father, Deleted Scenes, The Father Theatrical Trailer, and Previews of other Sony titles.

While the subject matter is difficult to watch, especially if you have watched a loved one suffer from Dementia, the acting and the video/audio quality are some of the best around.  Zeller has set the bar high in his debut and it will be interesting to see what he does next.