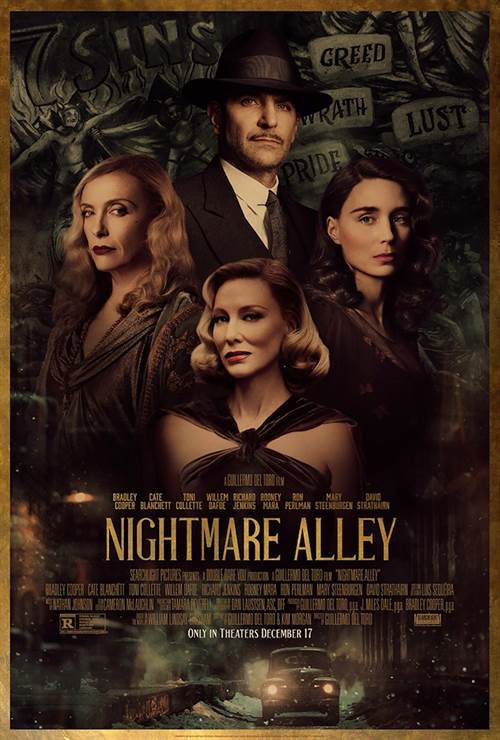 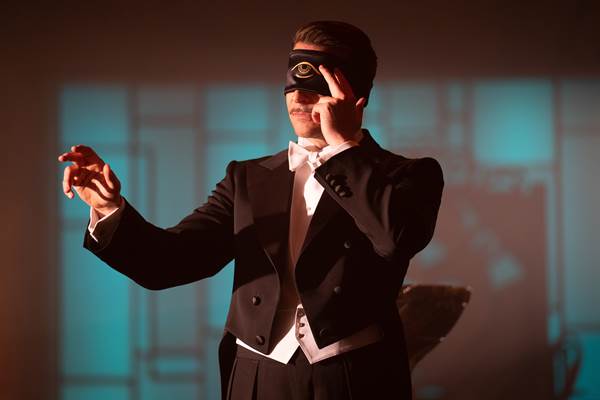 When charismatic but down-on-his-luck Stanton Carlisle (Bradley Cooper) endears himself to clairvoyant Zeena (Toni Collette) and her has-been mentalist husband Pete (David Strathairn) at a traveling carnival, he crafts a golden ticket to success, using this newly acquired knowledge to grift the wealthy elite of 1940s New York society. With the virtuous Molly (Rooney Mara) loyally by his side, Stanton plots to con a dangerous tycoon (Richard Jenkins) with the aid of a mysterious psychiatrist (Cate Blanchett) who might be his most formidable opponent yet.


Black and White Version of Nightmare Alley to be Released  17/12/2021 13:24 EST
Guillermo del Toro has announced that he will be giving audiences a special black and white version of "Nightmare Alley" a limited run in theatres. "Nightmare Alley: Vision in Darkness and Light" will be in select theatres in Los Angeles next month.Locations for the limited run include The New Beverly Cinema on Jan. 15 and Jan. 16, AMC The Grove from Jan. 14 through Jan. 20, The Landmark from Jan....  More>> 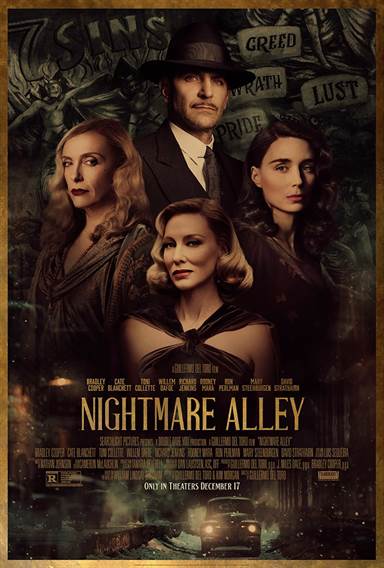 December is notoriously known to critics as the time of year most studios release their big contenders for Oscar contention. And this year we get “Nightmare Alley” from Academy Award-winning director Guillermo del Toro. For those who are a fan, del Toro needs no introduction. For those who don’t know, Guillermo del Toro’s Last picture was the Oscar Best Picture winner “Shape of Water”, which also gave him his first Oscar as Best Director & Original Screenplay. Guillermo del Toro has also given us visually creative films like “Pans Labyrinth” and “Hellboy” so my expectations for “Nightmare Alley” were rather high.

“Nightmare Alley” which is out in theaters now, is a dark tale about Stanton Carlisle (Bradley Cooper, Limitless) who after burning his home down, takes a job at a carnival working odd jobs and learning the ropes of carnie life. There Stanton befriends Zeena the Seer (Toni Collette, Knives Out) and Pete (David Strathairn, Godzilla) as well as the freak show operator Clem (William Defoe, The Lighthouse) and learns all he can about the human condition and how to deceive from the best at the game.

While Stanton is learning and improving his game, he falls for Molly Cahill (Rooney Mara, The Social Network) who performs as part of a sideshow act. Stanton impresses her with his visions for the future and convinces her to leave the carnival for a bigger and better life. Will it be better? Or will deception lead to destruction?

I’m not here to tell you the whole plot. You’ll have to see it for yourself but I will warn you… this story comes at a price. Guillermo del Toro has a running time of two hours and 30 minutes and while this movie is visually stunning and filled with some great cameo appearances throughout the film, it just felt really slow to me and something was missing. Each actor and actress in their own rights were fantastic. None better than Cate Blanchette who played Dr. Lilith Ritter who could have passed as a Lauren Bacall film noir character straight from a 40s thriller. Blanchett had me in the palm of her hand every moment she was on screen. Even Bradley Cooper did an amazing job with this seriously flawed and dark character proving once again how talented he is beyond Hangover movies and the voice of Rocket in the Marvel realm.

“Nightmare Alley” still has me pondering, the soundtrack & score were amazing, the individual performances were top-notch and the visuals & cinematography were stunning…I just can’t put my finger on what was missing. I can’t help but think this was a 3-hour film and there are pieces on the floor that would have made this better, but it just didn’t have the magic of “Shape of Water”.

Will it be nominated come Oscar season, most likely? I hope Cate Blanchette gets a nod. I just don’t see Guillermo del Toro taking home the Oscar for Best picture with “Nightmare Alley”. But I will say this, even while this one didn’t reach my expectations, it was WAY above so many of the movies released this past year and I’m still glad I saw it. Now I will sit back and wait till Guillermo del Toro and Disney go head to head in 2022 in the battle of the wooden doll who wants to be a real boy! Yes, Guillermo del Toro is in post-production on his Stop-motion animated version of Pinocchio. While Disney will release a live-action version. Wouldn’t it be amazing if Guillermo del Toro could beat Disney with animation at the box office!

While Nightmare didn’t rise to my expectations, I thought it was still something to see, visually stunning and way better than a lot of the sub-par films out there! I give “Nightmare Alley” 3.5 stars out of 5.