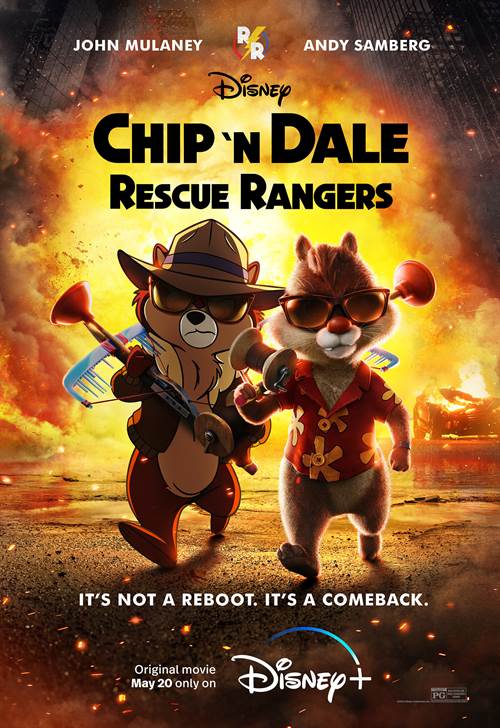 In “Chip ‘n Dale: Rescue Rangers,” Chip and Dale are living amongst cartoons and humans in modern-day Los Angeles, but their lives are quite different now. It has been decades since their successful television series was canceled, and Chip (voice of Mulaney) has succumbed to a life of suburban domesticity as an insurance salesman. Dale (voice of Sandberg), meanwhile, has had CGI surgery and works the nostalgia convention circuit, desperate to relive his glory days. When a former castmate mysteriously disappears, Chip and Dale must repair their broken friendship and take on their Rescue Rangers detective personas once again to save their friend’s life. 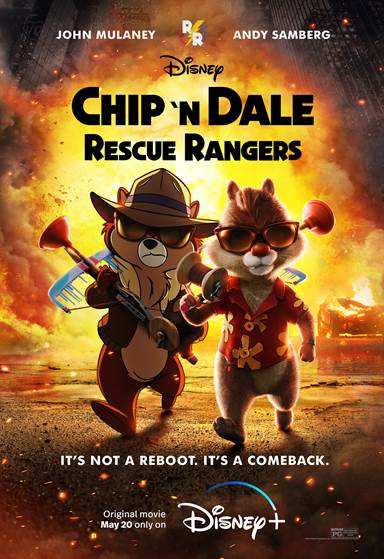 Disney, among other things, has always been associated with quality animated entertainment.  Typically they will have an animated feature film premiering every year. However, that wasn’t always the case and back in the 1980’s Disney seemed to have more success with after-school animated shows entitled The Disney Afternoon.  Gummi Bears, DuckTales, TaleSpin, and Chip n’ Dale: Rescue Rangers became staples on televisions all across the country and Disney theme parks cashed in on the success.  Seeing how everything old is new again and since Disney+ can always use more content, the powers that be signed off on a Chip n’ Dale: Rescue Rangers movie, debuting May 20, 2022.

As we catch up with two of our favorite crime fighters, we see they have grown apart after a disagreement regarding their careers.  Chip (Andy Samberg; Brooklyn Nine-Nine) has moved on to a quiet, mundane life as a successful insurance salesman while Dale (John Mulaney; Spider-Man: Into the Spider-Verse [voice]) is still making the rounds on the “FanCon” circuit.

The two meet up one day at their friend and former co-star, Monterey Jack’s (Eric Bana; Star Trek) home where Jack tells them he is in trouble and he owes a lot of money to Sweet Pete (Will Arnett; Arrested Development).  When Chip and Dale get a call the next day from the police saying Monty is missing they need to put their feelings aside and work together to find their friend.  Of course, they manage to mend broken fences along the way.

While not the original actors voicing most of the characters, the vocal talent assembled for this hour and a half, mixed media movie is impressive.  Samberg and Mulaney are no strangers to voice work and they give Chip and Dale an exuberant tone that is infectious.  Bana as Monty is an interesting choice because he is not necessarily known for doing animated films and many of his movies have a serious and violent tone to them.  This character gives him a chance to show off his more light-hearted side. Of the other “cameos” voiced in the movie, the best has to be Dennis Haysbert (24) as Zipper.  What makes it outstanding is 1) the deep tones coming from this tiny flying bug are unexpected and 2) in the television series, Zipper spoke only in “buzzes” that were understood by other bugs and Monty.

Visually, Rescue Rangers is an interesting mix of live-action, 2D, and 3D animation (This decade's Roger Rabbit).  Seeing the various formats blended together makes for a striking picture and the viewer could watch the film several times and spend one whole viewing on the mixed modalities alone. Director Akiva Schaffer (Popstar: Never Stop Never Stopping) does a great job with the actors while being very precise about what should happen in every scene (even in the background).  The script, written by Dan Gregor (How I Met Your Mother) and Doug Mand (Doolittle) is ok with some smart dialogue here and there.

If you were a kid of the ’80s and early ’90s and you raced home after school to watch The Disney Afternoon, this movie is a love letter to you.  It is as if Gregor and Mand wanted to see how many Easter eggs they could squeeze into 90 minutes and the whole film is full of them with some plot points thrown in-between.  While they can be fun and nostalgic for the adults watching, they will fly right over the heads of younger audiences.  With that thought in mind, kids will probably like the characters and enjoy the recycled plot but I don’t see them begging to watch the movie multiple times.