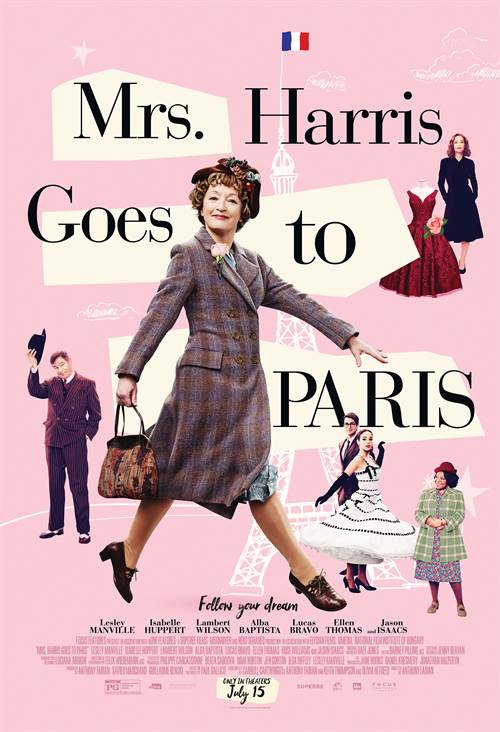 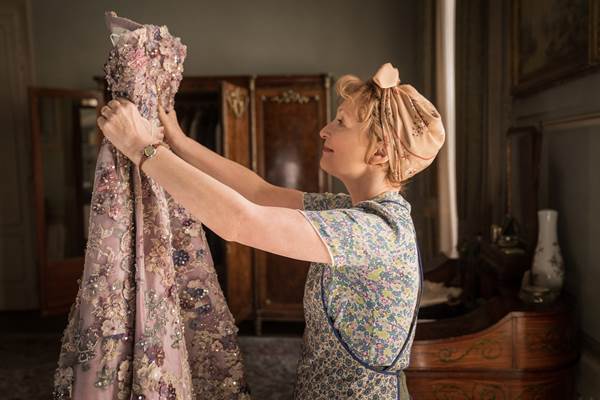 MRS. HARRIS GOES TO PARIS is the enchanting tale of a seemingly ordinary British housekeeper whose dream to own a couture Christian Dior gown takes her on an extraordinary adventure to Paris. 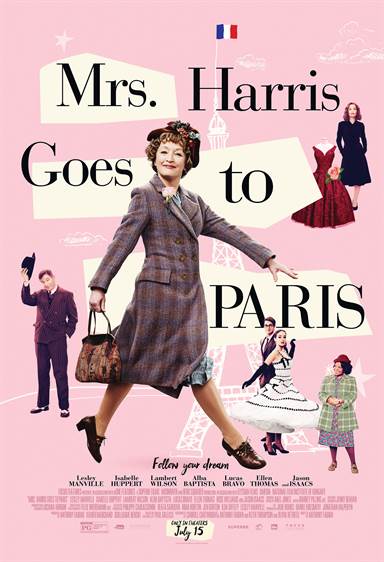 If you were to take a group of quirky British and French actors and mix them with a dash of sassiness, a pinch of Mary Poppins, and some exquisite, vintage, haute couture gowns, you would find yourself entrenched in the latest remake of the 1958 novel, Mrs. Harris Goes to Paris.  Yes, even the title is quaint and quirky - although this version from Focus Features is actually titled Mrs. Harris Goes to Paris.  Starring Lesley Manville (Phantom Thread) as the title character, the movie follows a cleaning lady on her quest to buy a Christian Dior gown… I guess you can throw a little bit of Cinderella in as well.

Ada Harris (Manville) lives a simple life in London, cleaning houses for a living as she awaits word from her husband who had served during World War II and never returned home.  While cleaning one of her clients’ homes she came across the most beautiful dress she had ever seen.  When the owner of the dress sees Mrs. Harris admiring the gown, she tells Mrs. Harris she bought it in Paris at Dior and the cost.  From that moment, Mrs. Harris was determined to save of her money, fly to Paris, and buy a Dior gown.

While she skimped and saved, even taking on extra work, she carried on in her daily life.  Eventually, she finds herself on a flight to France and ends up at the Dior showroom.  Of course, not understanding how the exclusive fashion house worked, she is discriminated against for being a “simple cleaning lady” (queue Pretty Woman).  Luckily, one of the wealthy patrons offers her his other seat and she chooses a dress to buy, only to find out that it takes over two weeks of fittings to make a Dior gown.  Disappointed, Mrs. Harris is ready to give up, when the “commoners” who work at Dior take her under their wing and offer her a place to stay, a tour of the facility and work even harder to complete her dress in a week’s time.

Manville is a sweet, breath of fresh air as the slightly naïve Ada Harris.  Her goal to work tirelessly towards her dream, while not understanding the politics behind the aristocracy, makes the character the underdog we all want to cheer for.  She is surrounded by veteran actors who help her to shine, including Jason Isaacs (The Harry Potter Series), Ellen Thomas (East Enders), and Lambert Wilson (The Matrix Reloaded).  Also, cast as the evil Directress of the House of Dior (think Cinderella’s stepmother) is Isabelle Huppert (Elle).

The story is simple, as is the script, but the cast elevates Mrs. Harris Goes to Paris to the next level.  Coupling the actors with Director Anthony Fabian (Skin) allows for some strong performances along with a few memorable camera shots and angles.  Unfortunately, the pacing is a little uneven causing the film to drag at times and, as any good recipe should have, the “spice” seems to be missing making the film a little bland.

Conversely, the true “star” of the film is the magnificent fashions of the house of Dior.  The suits and dresses are exquisite with one being more breathtaking than the next.  It is no wonder Mrs. Harris fell in love with the creations as they are truly masterpieces.  Kudos to the award-winning costume designer, Jenny Beavan (Cruella) for a job well done.

Mrs. Harris Goes to Paris is a decent film with a few missteps along the way (please explain to me how Rose Williams could fit into a dress made for Lesley Manville’s measurements).  However, if you want a cute, lighthearted, “gosh, golly gee” kind of movie with incredible fashions, this one is right up your alley. 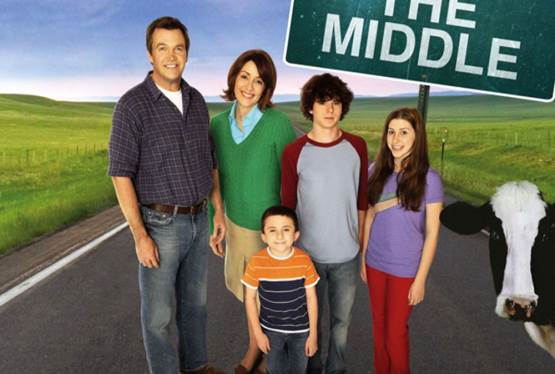