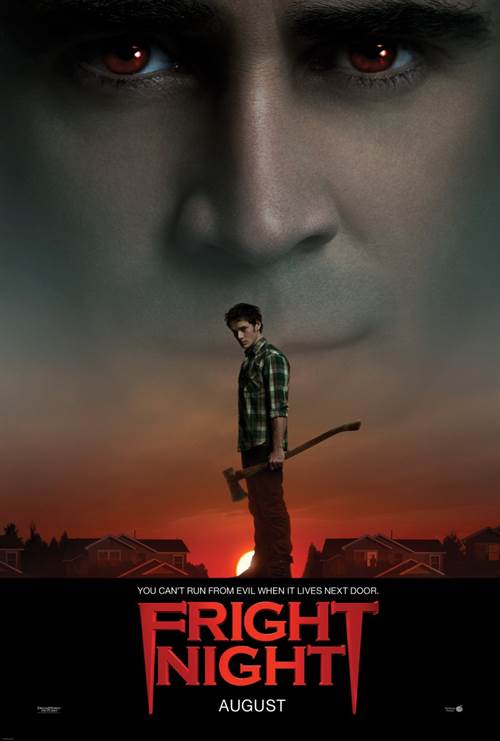 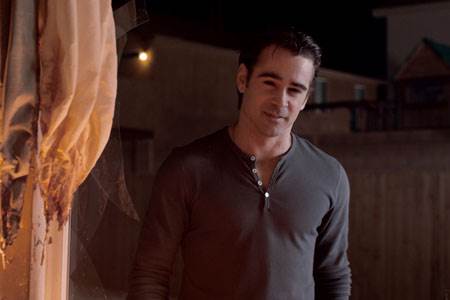 Senior Charlie Brewster (Anton Yelchin) finally has it all—he’s running with the popular crowd and dating the hottest girl in high school. In fact, he’s so cool he’s even dissing his best friend Ed (Christopher Mintz-Plasse). But trouble arrives when an intriguing stranger Jerry (Colin Farrell) moves in next door. He seems like a great guy at first, but there’s something not quite right—and everyone, including Charlie’s mom (Toni Collette), doesn’t notice. After witnessing some very unusual activity, Charlie comes to an unmistakable conclusion: Jerry is a vampire preying on his neighborhood. Unable to convince anyone that he’s telling the truth, Charlie has to find a way to get rid of the monster himself in this Craig Gillespie-helmed revamp of the comedy-horror classic.

Stream Fright Night in Digital HD/4K from the AppleTV store.

Listen to the Fright Night soundtrack on Apple Music.


Dreamworks Pictures Throws Fright Night Fan Frenzy at Comic-Con ...  24/06/2011 14:26 EST
BURBANK, Calif. (June 24, 2011) - DreamWorks Studios is pleased to present a special insider look at its upcoming, 3D reimagining of the horror classic "Fright Night"  at this year's San Diego Comic-Con  International Convention.  On Friday, July 22, a panel presentation will be held in Hall H of the San Diego Convention Center. On the dais will be talent from the film, including Colin Farrell, An...  More>> 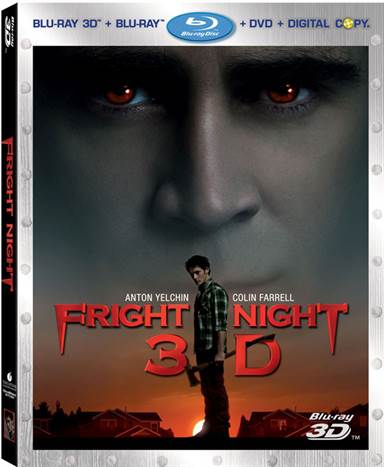 The scary, suspenseful, gory, shock filled Fright Night is now on 3D Blu-ray /Blu-ray, DVD Digital Download and On-Demand.  It's a frightening flick that takes its toll on those that have a love for the thrills that evil can provide.  You don't have to be Goth to enjoy this dark film, just a sense of humor and a need to feed your bloody thirst for a good horror movie.  In 3D you can double the experience.

Charley (Anton Yelchin) has finally made it to the in crowd in his senior year at his local high school.  He's got the top girl Amy (Imogen Poots), cool duds and the guys respect him, what more can a teen want.  How about some thrills, just what Charley needs, right?  Well he's about to get his fill when Jerry (Colin Farrell) a vampire moves in next door and starts raiding the neighborhood for ‘food'.  When his former best friend Ed (Christopher Mintz-Plasse) comes up missing, Charley tries to convince his mother and girlfriend that evil lurks in the house on the left.  Luckily Peter Vincent (David Tennant), the vampire killer is in town performing his magic show.

I am a huge horror fan and I've seen the 1985 Fright Night original starring Chris Sarandon as Jerry and Roddy McDowall as Peter Vincent and loved it even though it didn't have all the special effects that ramp up this version.  The remake of Fright Night does have much of the comedy as the first except here they use it as a relief from the horror where in Tom Holland's it was more of a tongue in cheek campy kind of fun.  While this one has a LOT more horror and suspense, it wouldn't be a bad idea to rent the original for some good laughs, but not before seeing the remake at least two or three times.

The performance by Colin Ferrell as the relentless blood lusting ghoul is chillingly terrific and most times terrifying.  He brings to Jerry a wicked smile and evil eyes that makes his character very creepy and spine chilling, just what's needed to carry off the menacing plot. There's this one scene where he pops up with help of some awesome 3D to enhance his ‘killer' instinct.

The 3D feature for Fright Night showed incredibly awesome on the movie theater screen, but in order to enjoy it on your home theater you need to have a large screen HD system.  I watched it in total darkness to get the full 3D effect and it's very good. If you are not into 3D, at the least, the film should be purchased in the Blu-ray format so you get top available sound and proper aspect ratio for best quality of presentation.

FINAL ANALYSIS: Fright Night 3D's a very good horror flick that's gory, but has plenty of comic relief for those that are squeamish.  Feature Film (B), Bonus Material (A), Overall (B+)