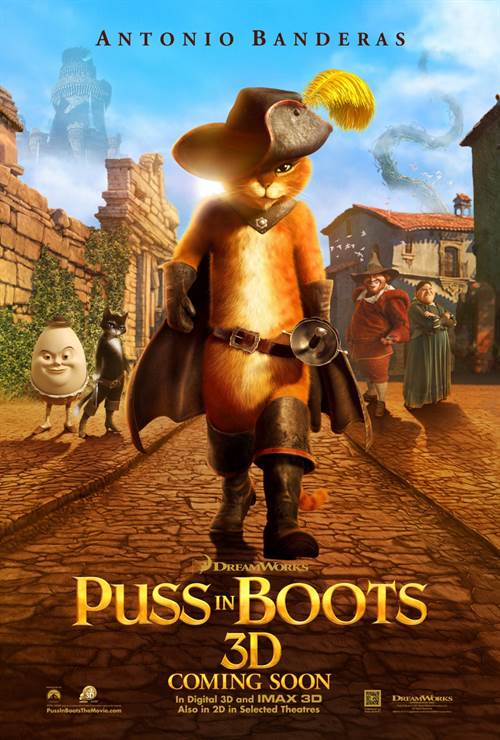 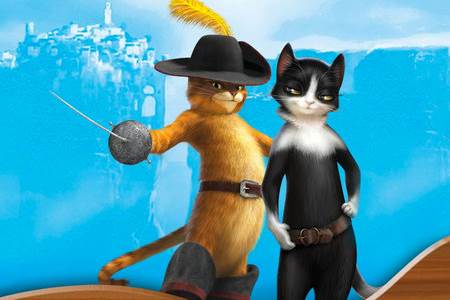 Way before Puss ever met Shrek, our suave and furry feline hero goes on a swashbuckling ride, as he teams with mastermind Humpty Dumpty and the street-savvy Kitty to steal the famed Goose that lays the Golden Eggs.

Stream Puss in Boots in Digital HD/4K from the AppleTV store.

Puss in Boots images are © DreamWorks Animation. All Rights Reserved. 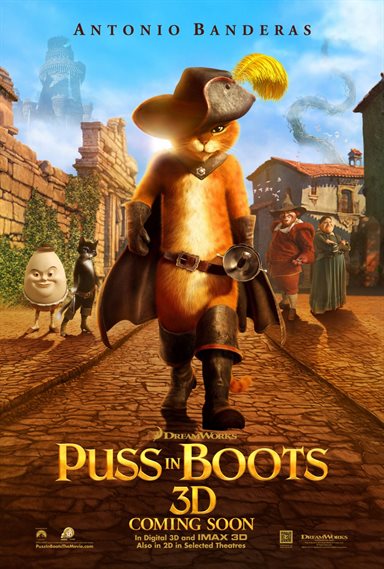 In the original story, Puss is a pretty arrogant cat.  He is not much of a sword-fighter, but is very smart as well as smartly dressed.  In Shrek, he is Antonio Bandaras, and he is a wizard with a blade.
Now we get a spin-off that takes place before the Shrek films:  Puss is an outlaw who grew up in an orphanage and hung out with none other than Humpty Dumpty -- a living egg.  He is now on the hunt for some magic beans that are in the hands of dangerous outlaws -- Jack and Jill -- and beguiled by Kitty Softpaws (Salma Hayek).
The movie takes us to the Shrek Universe – albeit, a drier desert part of it; and it is a fairly, stock Dreamworks animated film.  What I mean by that is that there is a pretty basic formula that these things follow.  They have big name actors (Antonio and Salma) to attract the adults; they give us a few twists and turns with either real or fake betrayals, and there is stuff we can all see coming miles away are missed by the characters miss completely.  Everyone is determined, and no one ever gives up for real.
There is a frosting of moral message over the top and just enough jokes for the grown-ups that the kids will miss.  This formula, along with competent writing, produces a watchable kid's film.  To really rise above it, you need to do something extraordinary that doesn't have any secret sauce to it -- Pixar does that with amazing reliability.  The Disney classics do it.  It is the extra special combination of great writing and perfect casting, e.g. Robin Williams as Aladdin's Genie that is just plain hard to bottle.
The original Shrek, for example, was just a little bit nasty.  It was poking fun at Disney in some subtle -- and other not-so-subtle -- ways.  It had a handle on its material that spoke to a deeper knowledge of the sources than anything in Puss in Boots.  It gave us a character who might not really qualify as edgy, but certainly wasn't simply "warm and fluffy".   Nothing in Puss in Boots is as edgy as Shrek was.  Nothing is as calculatedly, sophisticatedly vicious as Shrek's Lord Farquad.
I am a bit disappointed to say that for Puss in Boots they didn't bottle it.  The movie is competent.  It is enjoyable.  My 9-year old daughter will love it; but it doesn't break out of the box or break the mold and exceed its basic parameters.  It is basically for kids, and doesn't surprise us.  The characters are fairly stock and easy to see coming.  The movie is enjoyably humorous, but only to a degree; and it doesn't stay with you after you've seen it.  It might work as the start of a series for kids; people will pay to see more of these characters, but I would be surprised if it is a classic the same way the original Shrek was.
What the movie does get right is the sense of character.  Antonio Bandaras, animated or not, has certain magnetism and Salma Hayek, with whom he has worked before has chemistry that somehow comes through even in the animated characters.  Casting Zach Galiflankis as Humpty Dumpty creates the perfect mix of charisma and "scheming-ness" that we need to believe him.  Since one of the major draws for these movies is the casting that makes sense.
The animation is par for the course these days.  As for the 3D, like most movies these days, there is no real advantage to it here.  However, Puss in Boots has one great thing going fo it -- it takes us back to Shrek's fairy-tale world; and it shows us a little more of it.  If they make more of these, I would hope they get a little more courageous than their first trip out – I would hope for something a little more surprising.