It's the craziest mix-up ever! Goldie Hawn and Kurt Russell dazzle the screen in this buoyant and screwball comedy of memory-making and memory-faking. One of Hollywood's most dynamic screen pairs, Hawn and Russell make the most of every hilarious situation in this delightful riches-to-rags romance that's perfect entertainment for anyone who appreciates a great practical joke. Hawn is Joanna Stayton, the pampered wife of a pretentious, yacht-owning socialite. When their boat gets stuck for repairs, Joanna employs carpenter Dean Proffitt (Russell) to improve her closet space. But when Dean asks to be paid, he's blatantly turned down by the "nothing is ever good enough for me" Joanna.So when Joanna falls overboard and gets a bad case of amnesia, Dean takes advantage of the situation and, in a stroke of retributive genius, tells her that she's his wife and the mother of hisfour unruly children!

Download Overboard in Digital HD/4K from the iTunes store. 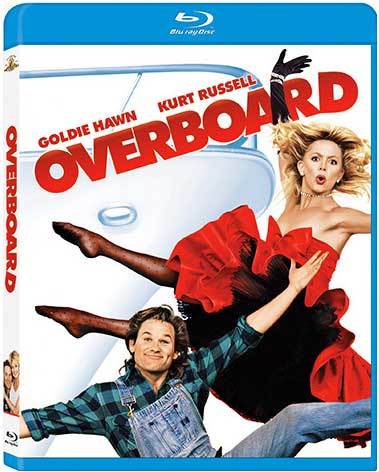 In the 1980's there were a few hits that not only helped shape the career of certain actors but also left a mark on the industry as well. In the vein of the traditional romantic comedy, Overboard shines an adult light on a genre that has become marred over the recent years with whiny twenty-something's all trying to be as independent as possible.
The film stars Goldie Hawn and Kurt Russell as the oddest of couples who find themselves through the strangest case of mistaken identity. Hawn plays Joanna Stayton wife of Grant Stayton III who live aboard their yacht traveling the high seas. Joanna is heir to a vast fortune and has grown up in a life of indulgence and excess. She is used to getting her way and has no qualms about doing what she feels is necessary to get her way. When they drop anchor in a small Oregon town, Joanna hires local carpenter Dean Proffitt (Russell) to build a new closet on her yacht.
When the closet is finished Joanna refuses to pay Dean for his work, regardless of the fact that she didn't specify how she wanted it done. That night as they set sail once again, Joanna accidentally falls from the yacht only to be rescued later. The trick here is that she now suffers from amnesia and her greedy husband sees this as his opportunity to get his hands on her money, so he denies any knowledge of her. Dean sees a newspaper with Joanna's picture reporting her dilemma and comes up with a plan to get his money back. He claims to be her husband, calling her Annie and taking her home to be housemaid and surrogate mother to his four children. His intention is to go along with this plan for about a month which he figures is equal to the amount of money she owes him.
Of course as time passes and Dean begins to see Joanna as more than just the heartless woman he knew from before. She is becoming more like the "Annie" he has imagined her to be and now it is hard for even of them to ignore the fact that they are developing feelings for one another. This creates the even greater dilemma for Dean as he realizes that it is only a matter of time before her memory returns and he will have to face up to his actions.
The film contains the spirit of the 80's within it when you look at the backgrounds, clothing and accompanying score. But what is beneath that nostalgia is a heartwarming story told through the medium of comedy about two people who find each other through uncommon circumstances. Every woman since birth dreams of finding her prince charming that will sweep her off her feet and give her a life of happiness. The catch with this dream is that they believe their dream "prince" must be just that, a man who can offer her the world. With Overboard, director Gary Marshall presents the idea that prince charming can any man as long as his heart truly loves the one he is with.
Finally the quirky comedy comes to Blu-ray and while it does look quite good after the Blu-ray treatment, it's surprising that there are no extras that come along with the Blu-ray. It is a shame because it would have been interesting to get some insight into the mind of legendary filmmaker Gary Marshall.
For now though having Overboard to own on Blu-ray will have to be enough and for fans of this classic 1980's romantic comedy, there is sure to be plenty of heart to go around.