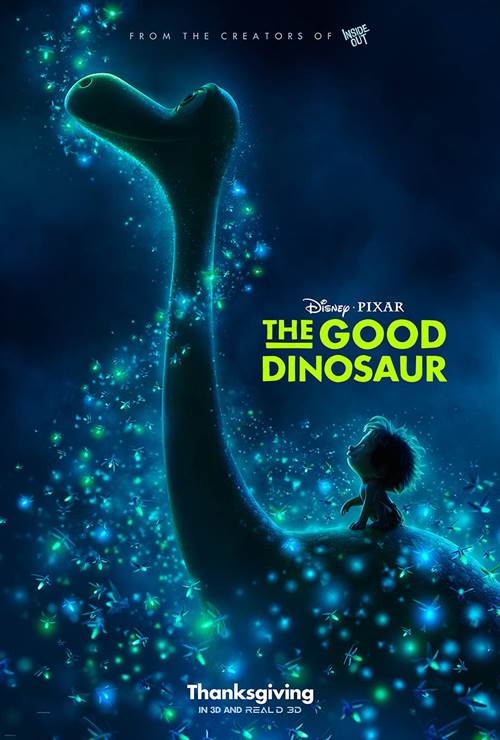 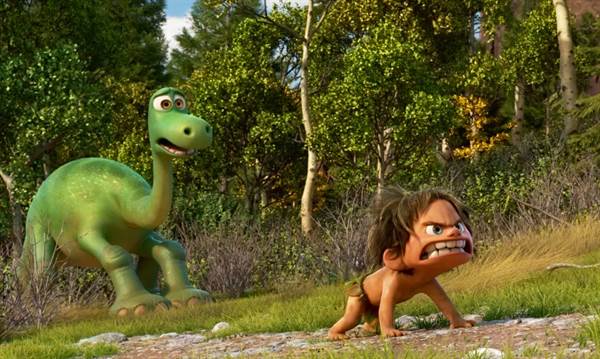 "The Good Dinosaur" asks the question: What if the asteroid that forever changed life on Earth missed the planet completely and giant dinosaurs never became extinct? Pixar Animation Studios takes you on an epic journey into the world of dinosaurs where an Apatosaurus named Arlo makes an unlikely human friend. While traveling through a harsh and mysterious landscape, Arlo learns the power of confronting his fears and discovers what he is truly capable of.

Stream The Good Dinosaur in Digital HD/4K from the AppleTV store. 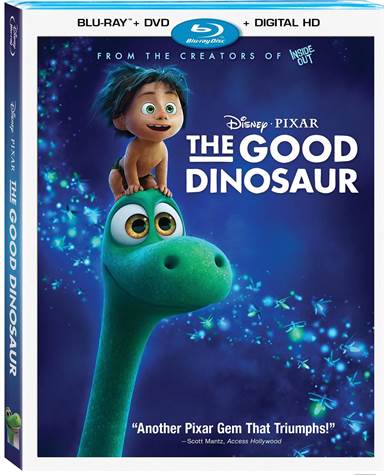 The Good Dinosaur explores what life would be like if the big meteor that destroyed the dinosaurs, never made impact with Earth. What would it have been like if they were still around today and the roles were reversed, with humans being the "animals"?

Arlo (Raymond Ochoa; A Christmas Carol) is one of three sibling dinosaurs.  The "runt" of the litter, he is small and afraid and has never made his mark in the family.  Poppa (Jeffrey Wright; The Hunger Games: Mockingjay Part I) is afraid he never will, so he plans a test for Arlo.  They set a trap for the critter, Spot (Jack Bright; Monsters University), eating the family stock of corn, and Arlo is to keep watch and kill Spot when it gets caught in the net. However, Arlo finds this task too much to bear and can't bring himself to do it.  After chasing Spot for a ways, Poppa meets his untimely demise, leaving Arlo feeling guilt and a responsibility to his mother to bring in the corn harvest. One thing leads to another, and we see Arlo get lost, literally and figuratively. Ultimately, he finds guidance from an unlikely source, Spot, who helps him find his way home.

Disney and Pixar had an extremely rough time getting The Good Dinosaur film completed into the final product you see today. It went through multiple release date changes, different directors, and even voice actors. While the final product is not one of Pixar's best, it is certainly not the worst they have ever done either. While the story borrows some elements from Disney's The Lion King, it does not mimic it enough where it doesn't tell it's own story about adolescence and growing up to find your place in the world. While most of the secondary characters are pretty much "throw aways", the main characters of Arlo and Spot will tug at your heartstrings by the end of the film as Arlo goes through a complete emotional arc throughout his journey.

For first time director Peter Sohn, this was a solid effort.  As mentioned before, the natural surroundings animation was terrific and the movie itself had a nice flow.  It will be interesting to see what he does as a follow up to his animated directorial debut.

The scenery in this film was amazing to watch on the big screen, and the Blu-ray certainly does not disappoint either.  In fact, the video quality was outstanding.  The different shades of earth tones really shown through with a lot of depth and brilliance. No detail was left unchecked - you can see every blade of grass, and every bit of texture shines through, creating a stunning visual display.  Accompanying the amazing video transfer is a DTS-HD Master Audio 7.1 lossless soundtrack which adds to the overall effect of the film.

Aside from the now standard iTunes HD digital copy of the film, Disney and the team at Pixar created a nice list of features that accompanied the film. Instead of just one or two super long shorts, they divided them into smaller sections so younger viewers wouldn't get bored and disinterested.

Sanjay's Super Team - The Pixar short that played before the film in theaters.

True Lies About Dinosaurs - An abbreviated history of what things the filmmakers took liberties with in the film.

Recyclosaurus - A look at the Pixar campus and employees team building making dinosaurs from donated items..

The Filmmakers' Journey - The standard Blu-ray fluff featurette on the behind-the-scenes process of making the film.

Every Part of the Dinosaur - A closer look at the creation of the dinosaurs in the computer environment.

Following the T-Rex Trail - The Pixar team research how real cattle and ranchers work to help with the T-Rex sequence in the film.

Dino Bites; Hide and Seek - Two short featurettes that are geared toward the younger children in the household showing the characters of the film having fun and playing games.

My favorite of them was Recyclosaurus as  I felt it showed the company in a different light.  It  was nice to see real people having fun instead of the normal "corporate machine" making another product.

The Good Dinosaur is certainly not one of Disney/Pixar's best films, but some of the technical accomplishments they have achieved with the background plates is simply amazing.  While the film doesn't have much to it, the core message and the relationship between Arlo and Spot is truly heartwarming and makes this the perfect family film.