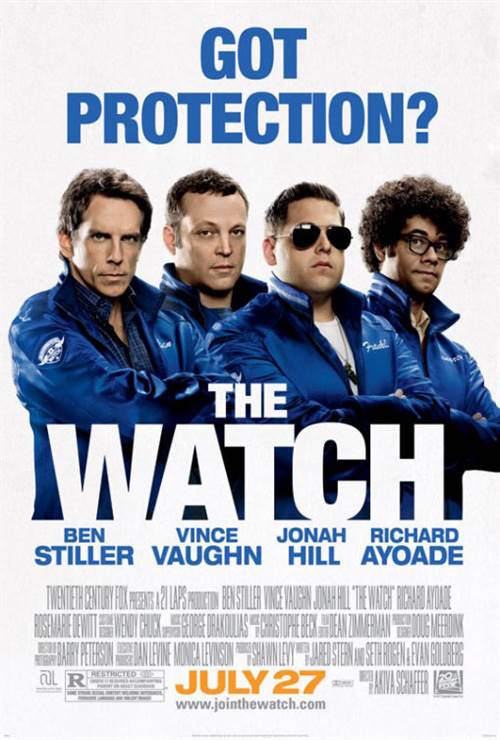 Four everyday suburban guys come together to form a neighborhood watch group, but only as an excuse to escape their humdrum lives, one night a week. When they accidentally discover that their town has become overrun with aliens posing as ordinary suburbanites, they have no choice but to save their neighborhood -- and the world -- from total extermination.

Stream The Watch in Digital HD/4K from the AppleTV store.

The Watch images are © 20th Century Fox. All Rights Reserved. 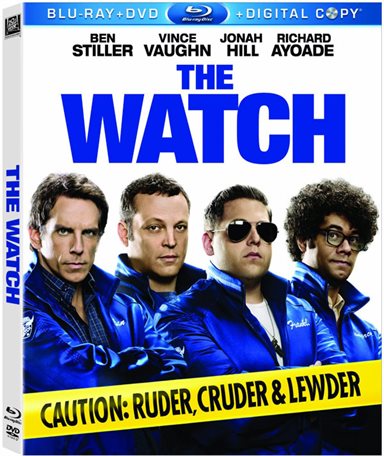 Costco seems like it would make a decent place to ride out the zombie apocalypse. You've got a near-endless supply of pallets loaded with bulk food, enough toilet paper to TP Trump Tower, and sliding metal gates to keep out the undead hordes. But who would have imagined that a Costco in suburban Ohio would be ground zero for an alien invasion of Earth. That's the unlikely premise of The Watch, a mostly unfunny sci-fi comedy written by Pineapple Express duo Seth Rogen and Evan Goldberg, directed by Akiva Schaffer.

This combination of individuals should tell you most everything you need to know about The Watch, which suffers from being pulled in two different directions, between the crass comedy of Rogen, Goldberg, and Akiva and Schaffer's cheery, family friendly aesthetic. As The Watch went through years of development hell, starting in 2008, Rogen and Goldberg extensively rewrote an initial script by Jared Stern, turning the project into a decidedly R-rated affair, but it's no surprise to learn that Schaffer originally envisioned the film as a "PG-13 kind of Ghostbusters-y thing."

The film begins with narrator Ben Stiller proudly proclaiming "Glenville, Ohio, U.S.A., Earth" to be the best place in the universe. Stiller plays Evan Trautwig, a Costco manager with total indifference to the world outside his tiny town. But you can't say he's not civically-minded, at least. He's a city council member, runs the local Spanish language club, and leads a jogging group—all of which take his attention away from his wife, Abby (Rosemarie DeWitt), who wants to have a baby but can't seem to get Evan in the sack. She's about to have even more alone-time. When the night security guard at Costco is savagely murdered—and skinned, by some stealthy, skittering creature—Evan decides to start a neighborhood watch to solve the crime and keep Glenville safe.

Incidentally, the film was supposed to be called Neighborhood Watch, but the Treyvon Martin killing—which occurred five months before the movie's release date—forced the Fox marketing department to scramble to rebrand a suddenly dicey title. It also probably didn't help the film's box office prospects that it debuted in theaters a week after the Dark Knight Rises mass shooting in Colorado. Not that this circumstantial bad luck ultimately matters much. The Watch's low-brow science fiction setup doesn't exactly scream blockbuster, and even at its best, the movie isn't nearly as hilarious as it desperately wants to be.

The script is a combination of disparate elements—penis jokes, bro-mance, sci-fi splatter action—that just do not blend well. And although the casting of Evan's rag-tag band of community protectors seems perfect at first, the parts quickly feel uninspired. Jonah Hill as Franklin, a lives-with-his- mom wannabe cop with social and emotional issues? Vince Vaughn as Bob, a hard-partying doofus of a single dad? Richard Ayoade as a nebbish English gentleman? And Ben Stiller as a husband stymied by his own neuroses and perceived sexual inadequacy? The thing is, we've seen each of these actors play the same essential role—and play them much better—in other projects.

That's not to say there isn't any fun to be found in The Watch. Jonah Hill may be doing the same arrested development shtick he's done previously in The Sitter, Cyrus, and 21 Jump Street, but his improvisation here is lovable in a weird, unsettling way. Best of all is Richard Ayoade, a capable writer/director in his own right, who offsets some of the crude American-style comedy with drier, more precise wit. The film could use more of it, especially when it veers from being a sort of buddy movie—four dudes drinking in a man cave, going on ridiculous nighttime adventures, etc.—into all-out alien shoot-em-up mode.

The story tiredly borrows from Invasion of the Body Snatchers, with evil otherworldly visitors hiding in plain sight among us, but the plot's really only here to get us from one gag to the next. An extra-terrestrial orb that fires a laser-beam when all four guys collectively "finger-bang" it; planet-destroying space jockeys who can only die from "severe trauma to the dick;" an orgy in a suburban basement, with dudes in a literal circle jerk. You get the picture. There are a few rare moments of worthy comedy, but most of The Watch is as dull as an all-night stakeout in a Costco parking lot.

Out now on Blu-ray, The Watch comes equipped with some solid extras, all next to a decent video and audio experience. Visually the film looks crisp and clear, especially considering its large budget. The same can be said for the audio, while it may lack the power of a truly immersive sci-fi film, it still handles itself well when pouring out of your speakers. As foe the extras, there are deleted Scenes: An even dozen, including Evan's eulogy for his skinned-alive pal, Antonio, a gag reel: More laughs in under four minutes than in the entirety of the film proper.
Jonah Alternate Takes: When filming, the director wasn't sure how far to take Jonah's character, so with each scene they had him ad-lib increasingly more deranged lines, some of which are collected here, watchmakers: Your usual making-of featurette, with quick interviews and some behind-the-scenes footage. Alien Invasions and You: The cast and crew give their thoughts on how they'd actually handle an alien invasion. Casting the Alien: A fake interview with the "alien" who played the alien. Theatrical Trailer and Sneak Peeks.

The Watch is one of those unfortunate comedies where by some combination of bad writing and poor timing the jokes just don't land as well or as often as they should. And while Jonah Hill and Richard Ayoade have a few moments of comic brilliance each, you can't help feeling that you've seen them play these same characters in better films or TV series. The Blu-ray features decent specs and a few fun special features, but you're better off renting this one.