Academy Award® nominated superstar Tom Cruise (Best Actor, 1996, Jerry Maguire) lights up the screen as Brian Flanagan, a young and ambitious bartender who becomes the toast of Manhattan’s Upper East Side. Raise a glass to Cocktail – now on Blu-ray for the first time ever with an astonishing new digital transfer. When Brian moves to Jamaica and meets an independent artist, their passionate romance brings a new perspective to his flashy, self-centered lifestyle. Academy Award nominated Elisabeth Shue (Best Actress, 1995, Leaving Las Vegas) and Bryan Brown (Gorillas In The Mist) join Cruise and in this exciting drama, sizzling with high-powered performances and a sensational soundtrack.

Download Cocktail in Digital HD/4K from the iTunes store. 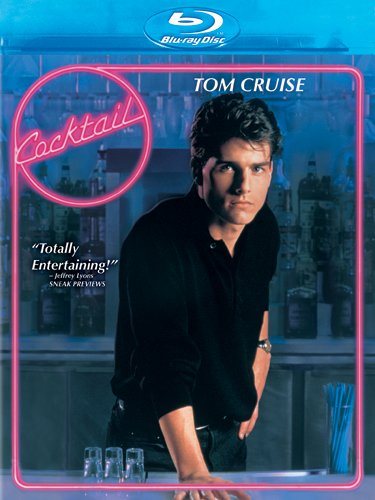 It has been said that Cocktail is a musical in disguise, and it makes a lot of sense. The film has a score composed of reliably catchy tunes, many of them Eighties classics that instantly evoke a specific time and mood. The two male leads, Flanagan and Coughlin, engage in choreographed dance routines disguised as bartending. The characters and their motivations are drawn in the kind of bold, broad strokes favored by a musical, and there are plenty of lyrics, which happen to be spoken instead of sung. Throw in one of those whirlwind romances between star-crossed lovers on which musicals seem to thrive, and you're good to go.

How would Cocktail be received if it were made today? Much better, for several reasons. For one thing, this type of film now has a name, and critics are always more comfortable when they can label a film. The complex relationship between Flanagan and Coughlin makes Cocktail an early form of "bromance", albeit one with a darkly twisted underside. Studio executives and marketing departments would be so concerned about audience response to the dark center of this apparently light-hearted material that they'd push to tone down its meaner elements. They'd certainly want an ending in which the two buddies are once again behind the bar, best friends forever, bantering and tossing bottles before an adoring crowd, just like the old days. Filmmakers who resisted such pressure and emerged with a film like the one we actually have, would look like men of integrity stubbornly clinging to their artistic vision, and the crowd would adore them for it.

Brian Flanagan (Tom Cruise), a blue-collar kid from Queens, returns home from army service with dreams of making it big in Manhattan. Declining his Uncle Pat's (Ron Dean) offer of manual labor in the old neighborhood, Brian proceeds to get turned down for every office job in the city, because he doesn't have a college degree. He ends up tending bar for Doug Coughlin (Bryan Brown) in a night spot on the Upper East Side.

Coughlin is a charming rogue, who's just clever enough to pass off cynicism as wisdom. He takes a shine to Brian, in whom he clearly sees a version of his younger self, and having never amounted to much in life, he drills it into Brian that he won't either. Many of the plot turns in Cocktail are driven by Coughlin's reaction whenever he sees Brian on the verge of achieving something that Coughlin no longer can.

For a time, though, the pair operate in sync, developing a kind of bartender duet that keeps customers lined up three and four deep to watch them perform. Before long, they've been snapped up by the owner of the latest hot club, where Brian jumps on the bar and spouts poetry to adoring patrons.

When the partnership busts up, Brian heads to Jamaica, where he can live cheaply and save money toward opening his own bar. After three years he meets The Right Girl, whose name is Jordan (Elisabeth Shue) and falls madly in love. Naturally it is at this precise time that Coughlin appears, having struck it rich by marrying money. Her name is Kerry (Kelly Lynch). Once again, Coughlin gets jealous and manages to insert himself between Brian and Jordan by flinging another woman (Lisa Banes) at his old partner. Jordan flees home to New York broken-hearted. Brian follows, but now he is a kept man of his new lady, who owns her own business. This is his final moment where he realizes that continuing on this path will only find him exactly where Coughlin is now.

There's never any doubt that Brian will win back Jordan, but that road involves several turns that don't need to be spoiled. Jordan's father (Laurence Luckinbill) is the closest thing to a traditional villain the film has to offer.

The film has been released on Blu-ray but other than a more polished look there is little else to comment on as there are no bonus features.

Brian Flanagan is the mid-way marker for Top Gun's Maverick and Jerry Maguire. All three characters have to get knocked off their perches, learn humility, and gain an appreciation for sincerity over hustle and substance over flash. One can debate Tom Cruise's acting ability ad infinitum, but his star power when playing these kinds of roles is beyond question. They always work for him, and Cocktail is no exception.