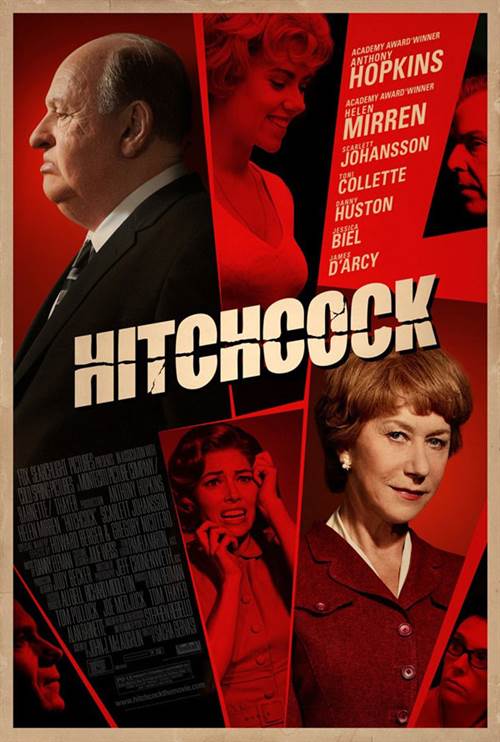 Following his great success with "North by Northwest," director Alfred Hitchcock (Anthony Hopkins) makes a daring choice for his next project: an adaptation of Robert Bloch's novel, "Psycho." When the studio refuses to back the picture, Hitchcock decides to pay for it himself in exchange for a percentage of the profits. His wife, Alma Reville (Helen Mirren), has serious reservations about the film, but supports him nonetheless. Still, the production strains the couple's marriage.

Download Hitchcock in Digital HD/4K from the iTunes store. 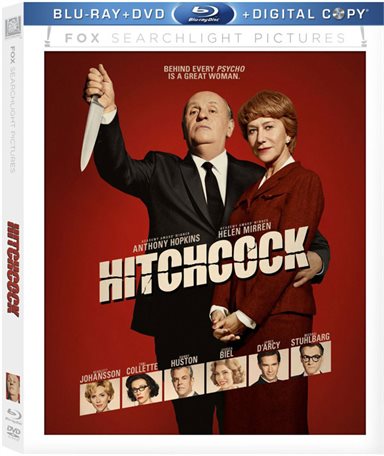 Now available on Blu-Ray & DVD is Fox Searchlight's Academy-Award nominated film Hitchcock.  (Nominated in the Best Makeup & Hairstyling category)  It stars Anthony Hopkins in the title role, with Helen Mirren playing his wife Alma, and features Scarlett Johansson as Janet Leigh.  While the title is just Hitchcock, the movie really should just be called How Hitchcock Made Psycho, as the movie only covers his life during that time frame.

Anthony Hopkins shines in this role playing the British director, and gets to the point where frequently I can't see the actor behind the makeup and voice – he catches Hitchcock perfectly and his performance is a masterpiece; making it disappointing that it wasn't recognized by the Academy.  You feel with him as he gets excited about a new project (Psycho) even though he isn't getting support from those around him.  You also see him react to his own personal life and the problems he has with it.  All of this is not just done by words but with body language – hallmarks of a wonderful performance.  Helen Mirren also is excellent in her role, playing Alma Reville, who is not just content to be a supportive wife, but to be her own person – who she was before she met and married Hitchcock.  Mirren was recognized with a Golden Globe nomination for her performance.  We see how she has stayed in the shadows, yearning to be free in the open air.  Alma is also going through her own personal issues, and Helen brings out her strength.  Scarlet Johansson plays the Hitchcock Blonde of Psycho, Janet Leigh.  Janet is happy being an actress, wife and mother – a subplot of the movie that revolves around not only the story of Psycho, but Hitchcock and Alma's relationship (except for the mother part, which is long since resolved at the time of the movie).  But that doesn't stop her from playing her minor role here – we witness her reluctance to film the shower scene because she doesn't want to be nude on film, to watching her reaction as Hitchcock is giving her aggressive and hostile direction during one of the car scenes in Psycho.  She is able to bring out the kindness in Janet, who very much enjoyed working with Hitchcock on the film.

Unfortunately, even with this amazing cast and performances from them, the story just doesn't quite gel to be Best Picture quality.  As mentioned before, this movie only covers a very short time period in Hitchcock's life.  If it had focused on the making of the movie only, it might have been better.  Unfortunately, it delves into many subplots, involving his relationship with his wife, her relationship with an author friend, and his relationship with his "girls"; the latter being the weakest link in the chain.  His wife mentions it several times and even Vera Miles (played by Jessica Biel) discusses it but only briefly.  The issue Hitchcock may have had with his "girls" is never fully confirmed, only hinted at, and that makes some of the issues later in the film hard to fully empathize with.  Had they delved further into that issue, it might have made that part of the movie gel and make it complete.  With that though, the parts surrounding the making of Psycho are amazing and a treat to watch, especially for fans of that movie or Hitchcock films in general. You will see the production from start to finish, from his problems having the movie picked up, to his problems with the censors over the film.  I think you'll enjoy it.