THE FOUR HORSEMEN [Jesse Eisenberg, Woody Harrelson, Dave Franco, Lizzy Caplan] return for a second mind-bending adventure, elevating the limits of stage illusion to new heights and taking them around the globe.

One year after outwitting the FBI and winning the public’s adulation with their Robin Hood-style magic spectacles, the illusionists resurface for a comeback performance in hopes of exposing the unethical practices of a tech magnate. The man behind their vanishing act is none other than WALTER MABRY [Daniel Radcliffe], a tech prodigy who threatens the Horsemen into pulling off their most impossible heist yet.

Their only hope is to perform one last unprecedented stunt to clear their names and reveal the mastermind behind it all.

Download Now You See Me 2 in Digital HD/4K from the iTunes store.

Now You See Me 2 images are © Summit Entertainment. All Rights Reserved.


Now You See Me 3 in Development  22/05/2015 10:32 EDT
Lionsgate has announced that they are now in the beginning stages of developing "Now You See Me 3".  The news was announced this morning by CEO Jon Feltheimer during a conference call discussing quarterly earnings.  "Now You See Me 2" is slated for a June 10, 2016 release, and will star Mark Ruffalo, Woody Harrelson, Jesse Eisenberg, Isla Fisher, Dave Franco, Morgan Freeman and Michael Caine.Direc...  More>>

Now You See Me 2 Theatrical Review 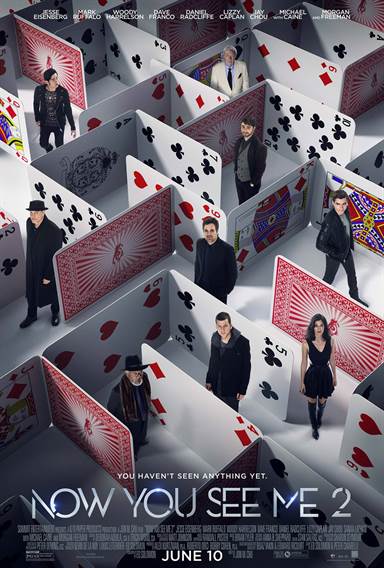 Who doesn't love magic?  The sleight of hand. The trick of the eye. The elaborate showmanship meant to distract the unsuspecting, naïve spectator.  It's fantasy and theatrics that has people the world over delighting in the grandeur of it all.

There have been any number of movies where magic serves as the backdrop to drama and suspense.  The Prestige and The Illusionist are two of the more recent offerings, and 2013's Now You See Me became a box office success.  Capitalizing on that, Lionsgate is bringing the sequel, Now You See Me 2, to theaters on June 10, 2016 with rumors of two more sequels to come.  If audience reaction is any indication, the third and fourth installments are a sure thing.

Having been in hiding for the last year, the Four Horsemen have returned to sabotage a new, technological launch and expose the CEO as a greedy bastard who plans to sell users personal information. However, before they can really get started things go horribly wrong and they, along with their ring leader, Dylan Rhodes (Mark Ruffalo; Spotlight) are exposed instead.  That is when things begin to get weird and interesting.

The Horsemen find themselves in Macau under the thumb of the thought to be deceased Walter Mabry (Daniel Radcliffe; Harry Potter and the Deathly Hallows: Part 2).  Mabry wants the Horsemen to steal a microchip he created that can hack any computer in the world.  What the Horsemen don't know is that Mabry has alternate plans for them and Rhodes.  With amazing dexterity and simple card tricks, the Horsemen manage to steal the chip and take down Mabry and his father, Arthur Tressler(Michael Caine; Kingsman: The Secret Service).

Director John M. Chu (G.I.Joe) needs to learn that some times, less is more.  The card trick sequence used as the Horsemen try to steal the microchip goes on entirely too long and becomes a little groan worthy. The botched motorcycle scene is a hot mess of awkward camera angles and quick cuts that don't allow the audience time to catch up on what is actually happening.

The cast, with slight exceptions, are great. Jesse Eisenberg (The Social Network) as J. Daniel Atlas is complicated, as his barely hidden anger and desire to be leader of the group bubbles just under the surface. Ruffalo is excellent as the leader of this merry band and returner Dave Franco (Superbad) fits in to the cohesive group.  Woody Harrelson (Zombieland), playing dual roles, is good as Horseman Merritt McKinney, but annoying as his twin brother with a bad afro.  Newcomer to the group, Lizzy Caplan (Masters of Sex) fills the spot vacated by Isla Fischer, but isn't as sophisticated and engaging as Fischer was.  It is a nice change to see Radcliffe play a bad guy as opposed to the young wizard.

The plot is intriguing, but bogged down with details that distract from the magic.  While leaving the theater with some questions is a good thing with a movie like this one, being perplexed by the relationships and the plot points is disappointing.  There were several pieces I wish had been fleshed out in more detail and other things I think could have been left out.

From a purely entertainment stand point, Now You See Me 2 is an interesting two hours and for budding magicians it's probably a must see.  However, as with many sequels, it doesn't equal the original.