The team who brought you Despicable Me and the biggest animated hits of 2013 and 2015, Despicable Me 2 and Minions, returns to continue the adventures of Gru, Lucy, their adorable daughters—Margo, Edith and Agnes—and the Minions.

Download Despicable Me 3 in Digital HD/4K from the iTunes store.

Despicable Me 3 images are © Universal Pictures. All Rights Reserved.


Despicable Me 3 and Boys & Girls Club of America Partner for "Me...  27/11/2017 12:44 EDT
Universal Pictures Home Entertainment and the Boys & Girls Clubs of America are teaming up for a "Merry Minions" Holiday Program,  a joint venture designed to celebrate the season with help from the home entertainment release of Despicable Me 3-- the biggest animated film of the year presented by Illumination and UPHE -- and the iconic Minions.  Despicable Me 3 has grossed over $1 billion at the g...  More>>

Win Complimentary Passes For Two To An Advance Screening of Univ...  19/06/2017 16:24 EDT
When Despicable Me came to theaters in 2010, no one could have predicted the franchise it would become. It not only warranted a sequel in 2013 but two spinoff movies starring those adorable, little,  yellow guys - the minions.  The movie and the minions also have spawned merchandising opportunities galore and there is even a ride at Universal Orlando Resort.  Finally, just in time for summer vacat...  More>>

Win Complimentary Passes to See a 3D Advance Screening of Univer...  19/06/2013 11:11 EDT
Universal won't be releasing "Despicable Me 2" nationwide until Wednesday, July 3, but we are giving you a chance to see a 3D advance screening! Simply click here to enter the sweepstakes and like us on Facebook. All names will be entered into a drawing for two complimentary tickets to see "DESPICABLE ME 2" in WEST PALM BEACH, FL, before it opens nationwide.   Contest ends June 26, 11:59 PM EST. F...  More>>

Sandra Bullock to Voice Lead Villain in Minions Film  12/02/2013 15:07 EDT
Sandra Bullock has been chosen to voice the lead villain in the upcoming film, "Minions"  The film is a spinoff from the Universal Pictures "Despicable Me" franchise.  Bullock will play Scarlet Overkill, a stylish super villain who plans on taking over the world.  "Minions" will feature the little yellow henchmen that will also be making appearance in this summer's "Despicable Me" sequel.  They fi...  More>>

Despicable Me Minions Get Spinoff Film  22/08/2012 11:44 EDT
Universal has announced that they will be making a "Despicable Me" spinoff film for the Minions.Before the spinoff is released, the Minions will be seen in "Despicable Me 2", which will be released on July 3, 2013. The as of yet untitled spinoff, which is currently being called the Untitled Minions Project In 3D, already has a scheduled release date for December 19, 2014.The film will be produced ...  More>> 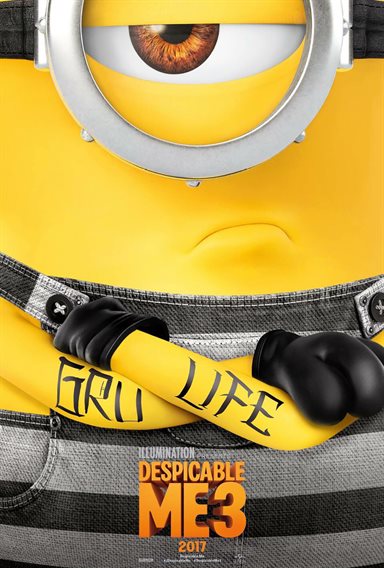 Let's face it… Illumination Entertainment and Universal Pictures hit gold back in 2010 when the first Despicable Me movie made its way into theaters.  With great characters, funny lines and a solid story, it delighted audiences, especially the adorable little yellow Minions.  Due to its success, it was followed in 2013 by its sequel along with the spinoff films starring the Minions. It spawned a plethora of merchandising opportunities and the Minions even have their own amusement park ride.  This year, in anticipation of the July 4th holiday, Gru (Steve Carell; The Office), Lucy (Kristen Wiig; Bridesmaids), the girls and all the Minions are back in Despicable Me 3.

After marrying Lucy, Gru turned from a life of crime to a secret agent bringing justice to the world.  However, when his nemesis Balthazar Bratt (Trey Parker; South Park) slips through his fingers yet again, Gru is fired by the new head of the AVL.  Without a job and unsure of what to do, he gets an unexpected visit and discovers he has a twin brother, Dru (Carell) who needs Gru's help.  So Gru, Lucy and the girls head to Fredonia to meet this long lost family member.

Living in a big house as a successful pig farmer, Dru has a secret that their father, who Gru thought had died, was actually a successful villain.  Now that he has passed away, Dru wants Gru to show him how to be a villain but Gru explains he left all that behind for marriage and kids.  However, When Bratt steals the most expensive Diamond in the world, the brothers go on a quest to steal it back.  Along the way they have their bumps and bruises but ultimately come to an emotional reconciliation.

One thing the film has going for it is its talented cast.  Carell is excellent at his voiceover work and Gru is a well know and recognizable character.  His turn at Dru is also well done, as he makes two distinct but similar voices.  Wiig is great as Lucy and her voice has a warm tone to it that is appealing.  Parker's Bratt has a rougher edge which is perfect for the villain he plays.  Of the three girls, Nev Scharrel's (Clippings) Agnes is absolutely adorable and she manages to steal the show a few times.  Of course, those adorable little, yellow guys –the Minions- are very much the scene stealers as well, though they don't appear too much throughout the hour and a half running time.

The soundtrack, filled with ‘80's pop tunes and original songs from Pharrell Williams, adds to the overall upbeat feel of the film and gives off an aura of general happiness. The animation is excellent but I expect no less from an Illuminations Production.  Vibrant colors permeate the screen making everything bright and joyous.

The film has a lot going for it yet, somehow, it just doesn't have the same feel as the first two films and drags a little.  While it offers up a few laughs, there wasn't enough to offset the moments that lag in between.  I didn't especially like the Balthazar Bratt character and found him rather annoying, which may have diminished my enthusiasm for the movie.  Carell has stated he doesn't know that he would reprise his role as Gru in a fourth film (but did insist he would be willing to do a cameo in future Minions movies) and I think he makes a wise choice.

While I love the Minions and the Girls (especially Agnes) and I like the family aspect of them, Lucy and Gru, I just didn't like this third installment as much as I did the first two. However, if you are a fan and have little ones, you should take some time this summer and make a family outing to the movie.