The third installment of the blockbuster Divergent series franchise, ALLEGIANT takes Tris [Shailene Woodley] and Four [Theo James] into a new world, far more dangerous than ever before.

After the earth-shattering revelations of INSURGENT, Tris must escape with Four and go beyond the wall enclosing Chicago. For the first time ever, they will leave the only city and family they have ever known in order to find a peaceful solution for their embroiled city. Once outside, old discoveries are quickly rendered meaningless with the revelation of shocking new truths. Tris and Four must quickly decide who they can trust as a ruthless battle ignites beyond the walls of Chicago which threatens all of humanity. In order to survive, Tris will be forced to make impossible choices about courage, allegiance, sacrifice and love.

Download The Divergent Series: Allegiant in Digital HD/4K from the iTunes store. 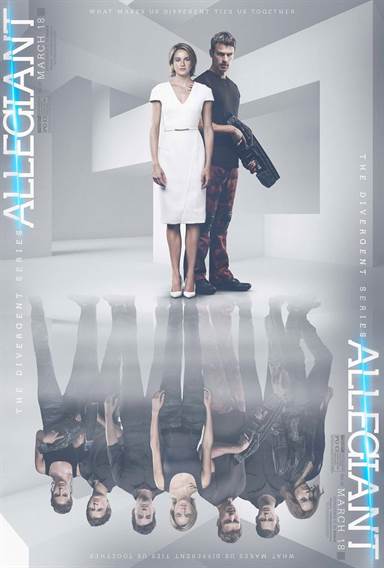 There are some movies that are going to make money regardless of if they are good or bad.  Allegiant is one of those movies.  With a built in audience, and two films preceding it, it is sure to be a winner at the box office.  Whether it is good or not is a matter of perspective.

In the continuing saga of Tris (Shailene Woodley; The Fault InOur Stars), Four (Theo James; Underworld Awakening) and the factions, the settlement of Chicago was rocked at the end of the last film with the discovery that there is life outside the wall – or at least there was 200 years ago.  Afraid of change, Evelyn (Naomi Watts, Birdman) forbids anyone to venture outside the wall.

When Tris, Four and a few of the others disobey her, they find a world they never could have imagined and what seems to initially be their salvation, may very well turn out to be their undoing.  Beyond the wall, they discover they are an "experiment" that has grown dangerously out of control, and the Director of the Bureau, David (Jeff Daniels; Steve Jobs), will take almost any action necessary to set things right.

Allegiant is beginning to suffer the same fate as another recent book trilogy turned movie series, in that it has lost some of the original appeal and has gotten boring.  The original film, Divergent, seemed exciting and introduced us to a series of multi-layered characters set in a complex world.  This latest edition no longer has the character development that engrossed us, nor the entanglements of beginning of the story.

Part of the problem is the decision to split the final book in the series into two movies, which happens so often these days in an attempt to cash in at the box office.  Because the movie slightly veers off from the original book, and there is so much plot being shared between two full length feature films, the pacing of this first part is a little slow. Even Woodley seems slightly bored with playing Tris once again now that her journey from shy, quiet Beatrice to fierce warrior Tris is complete.

A shining spot has to be the graphics though. The visual effects in the film are well done and the moments of advanced technology throughout the movie are in a word…cool.  The backgrounds are also well done and don't seem to look fake to me, which can often happen with CGI.

Unlike the first two movies in the series, Allegiant seems to be geared towards a younger audience.  While I felt Divergent and Insurgent could be enjoyed by young adults up, this one seems to only care about the younger demographic.

If you've read the series and have seen the first to films, you will want to continue the saga and go to see Allegiant. I can only recommended going into it with lower expectations and an open mind, as it wasn't as good as its predecessors.

On The Basis of Sex