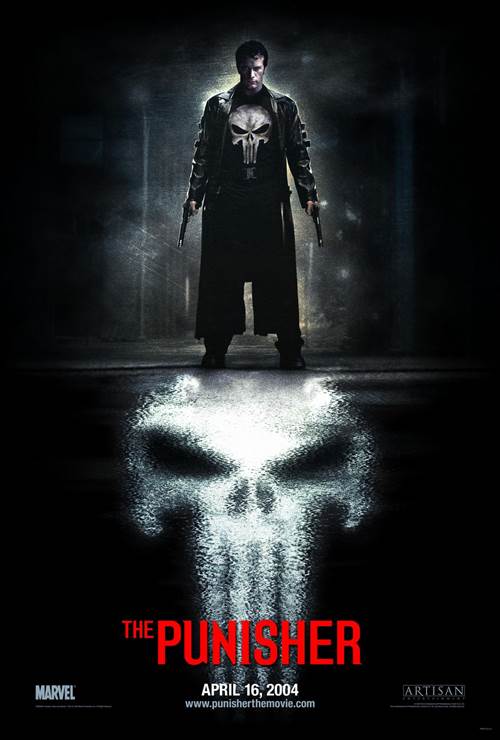 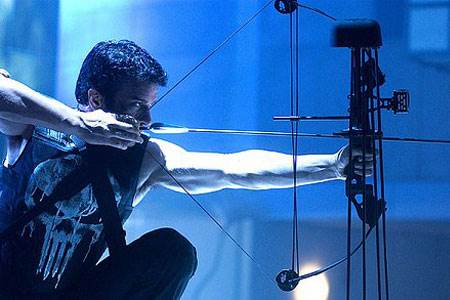 Special agent Frank Castle had it all: A loving family, a great life, and an adventurous job. But when his life is taken away from him by a ruthless criminal and his associates, Frank has become reborn. Now serving as judge, jury, and executioner, he's a new kind of vigilante out to wage a one man war against those who have done him wrong.

Stream The Punisher in Digital HD/4K from the AppleTV store.

Listen to the The Punisher soundtrack on Apple Music.

The Punisher images are © Lionsgate. All Rights Reserved.


Punisher: War Zone Is Still R Rated  21/08/2008 13:16 EST
There have been a  lot of rumors swirling around the "Punisher: War Zone" film.  People have said that the film won't be rated "R" and also that Lexi Alexander won't be directing. Well, according to Ain't It Cool News, Steve Gainer, the film's cinematographer, nothing could be further from the truth.  He posted a thread on the Raw Studios message board stating the following:"Holy smokes, I go away...  More>> 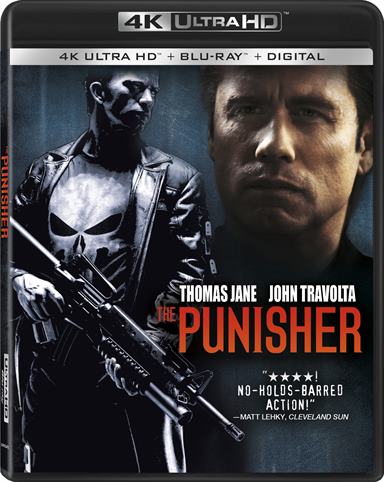 The Punisher made his debut in Marvel Comics The Amazing Spider-Man #129 Comic Book in 1974.  When he arrived he was a vigilante and deadly but certainly no saint or superhero. He murdered, kidnapped, extorted, coerced and did almost anything necessary to rid the world of criminals including the Mob family that killed his wife and children.  He actually started as part of the Jackal storyline who was out to kill Spider-Man and was revealed to be a skilled marksman and strategist as he had former Marine training.  He has been portrayed by a number of individuals on both the small screen and the big one but Thomas Jane's 2004 version is one of the most memorable.  Luckily, it is making its way to stores on 4K UHD this month.

Frank Castle (Thomas Jane; Deep Blue Sea) was an undercover FBI agent when an arms smuggling bust went wrong and one of the smugglers killed was the son of Mafia Boss Howard Saint (John Travolta; Pulp Fiction).  In retaliation, Saint had Castle's entire family slaughtered during a family reunion in Puerto Rico.  Believing Castle was also dead, Saint went on with his life until one day, five months later, Castle shows up alive and hell-bent on revenge. The next hour of the film is a tit for tat of Castle laying the foundation of Saint's ruin while sent sends thug after thug to try and kill Castle.

Castle spends his time not only sabotaging Saint's business ventures but also planting seeds that makes Saint doubt the people around him, leading him to eventually kill both his best friend and his wife with his own hands.  Meanwhile, Castle's neighbors in the slum building he lives in create a sort of family assisting and protecting Castle as he does for them to a certain extent.

Jane was an excellent choice to play the Punisher and he took the role to heart training for months to learn military tactical maneuvers as well as build muscle.  His quiet, brooding expressions that painted his chiseled face clearly portrayed a man experiencing a personal torture.  If I was going to remake this film today I might cast Tom Hardy (Venom) as Castle. Travolta lent his particular cool swagger to Saint that makes him appealing and repulsive all at once. With a terrific supporting cast including Rebecca Romijn (X-Men), Will Patton (Armageddon) and Ben Foster (Hell or High Water), there is a fluidity that makes the film enjoyable.

The 2160p video presentation generally enhances a film but I can't say that is always true and in this case, it may be a little bit of a hindrance.  There are certain scenes that benefit from the finer detail and sharpness but some seem to look fake like the wide shot of Saint's mansion (even though we know it is real).  However, the Dolby Atmos audio is great and adds a wonderful richness to this film.  Every gunshot and explosion (and believe me there are plenty) can be heard distinctly.  The Combo pack has a 4K Disc, Regular Blu-ray disc, and a Digital HD download.  It also has several extras that offer over an hour of footage.  They include: Audio Commentary With director Jonathan Hensleigh, Deleted Scenes with Optional Director Commentary, Keepin' It Real: Punisher Stunts, Army of One: Punisher Origins, War Journal: On the Set of The Punisher, Music Video "Step Up" Performed by Drowning Pool, and Drawing Blood: Bradstreet Style.

While the Punisher offers a lot of action  - I'm curious as to what the kill count is on this film – it lacks an important aspect of the story – heart.  I don't get the full sense of Castle's anguish at having lost literally his entire family in the span of five minutes.  If you are a fan though, I recommend this set if for no other reason that the extras give some great insight into the filming process.