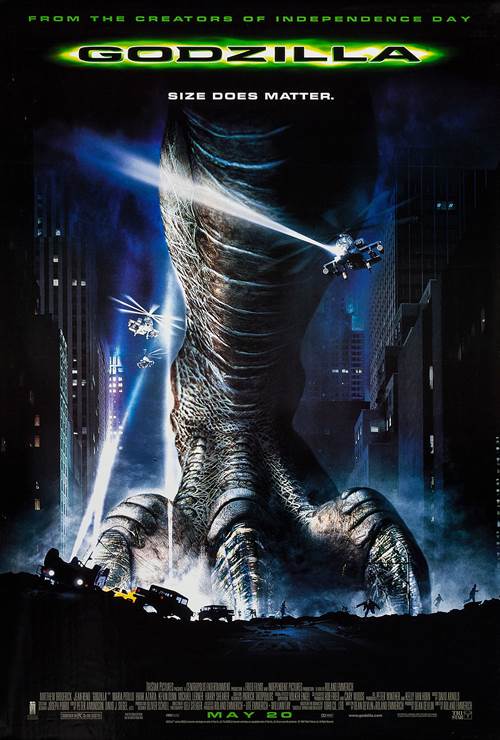 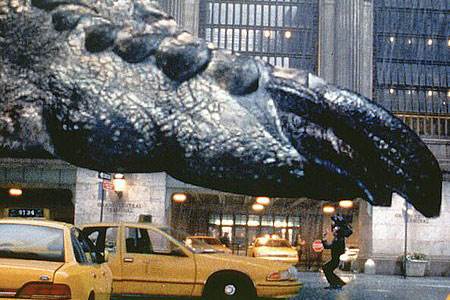 When a freighter is viciously attacked in the Pacific Ocean, a team of experts -- including biologist Niko Tatopoulos (Matthew Broderick) and scientists Elsie Chapman (Vicki Lewis) and Mendel Craven (Malcolm Danare) -- concludes that an oversized reptile is the culprit. Before long, the giant lizard is loose in Manhattan, destroying everything within its reach. The team chases the monster to Madison Square Garden, where a brutal battle ensues

Stream Godzilla in Digital HD/4K from the AppleTV store.

Listen to the Godzilla soundtrack on Apple Music. 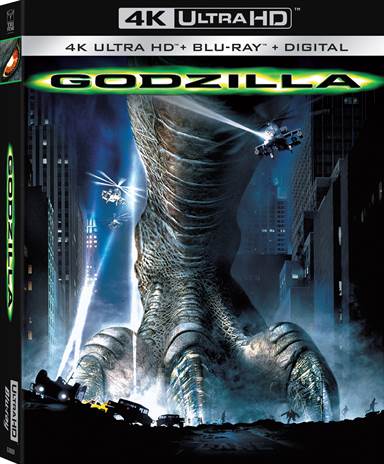 Back in 1990, an Americanized version of Godzilla was shopped around to various "hot" directors at the time such as James Cameron, Time Burton, Paul Verhoeven, and Jan de Bout, with it eventually landing in the laps of the team responsible for the hit 1996 film Independence Day, Dean Devlin and Roland Emmerich.

The story, unique in its take, starts with an unknown entity traveling from the French Polynesian islands, wreaking havoc along the way, as it makes it way to the city that never sleeps, New York City.  It turns out that this animal is an upright, walking, Komodo dragon that had been mutated by all the nuclear testing the French government has been conducting and has been named Godzilla.  Godzilla wants to call New York his home to himself and his hatchlings, which could spell disaster for the human population. The film stars Matthew Broderick (Ferris Bueller's Day Off) as the often mispronounced Dr. Niko Tatopoulos, Jean Reno (The Professional), Maria Pitillo (Natural Born Killers), Hank Azaria (The Simpsons), Kevin Dunn (Transformers), and Doug Savant (Melrose Place).

While commercial and fan appeal was much lower than expected (even some irate fans started to refer to the film as G.I.N.O (Godzilla in Name Only)), it did have its moments. For mass audiences, it was a fun "popcorn" film that one would go to in the summer to put their brains "in check" and just relax. For the time, the special effects were amazing - this was only 5 years after Jurassic Park - but the effects of this film were miles ahead of that. Even though the cast was pretty much one-dimensional, their performances still make me smile to this day.

The 2160p/HDR transfer of Godzilla is out of this world. The previous Blu-ray transfer doesn't even come close to this one. Colors are more bright and vivid, and the dreary nighttime sky with rain looks fantastic in 4K pulling out details and textures barely even seen back in 1998 in the theater. While the DTS-HD Master Audio 5.1 lossless that was provided on the Blu-ray release of Godzilla (1998) was in itself hailed as one of the best action audio mixes around, the new Dolby Atoms mix brought to this 4K release is one for the books. The extra depth field has every ship crash, the roar of Godzilla, and just the overall chaos in the city sound like you are actually inside the film listening to everything happen all around you. This release is pure audio bliss.

Aside from the theatrical trailers, the special features are relegated to the Blu-ray disc in this combo pack.  Unfortunately, it appears nothing new was produced for this release and they are the same recycled ones from the last Blu-ray release. These features include: All-time best of Godzilla fight scenes, Behind the scenes with Charles Caiman, A music video for "Heroes"  by The Wallflowers, a sneak peek at another film called 2012, and The Ultimate Godzilla Multi-Player Trivia Game.

While Godzilla (1998) was not a commercial or financial success (keeping the studio from making the two planned sequels) it was nonetheless a fun thrill ride in the late 1990s that provided an escape from the world for about two hours, and if you are a fan there is no better, definitive edition to own than this one.  This fan, at least, is happier with it than ever.