Television reporter Angela Vidal (Jennifer Carpenter) and her cameraman (Steve Harris) are assigned to spend the night shift with a Los Angeles Fire Station. After a routine 911 call takes them to a small apartment building, they find police officers already on the scene in response to blood curdling screams coming from one of the apartment units. They soon learn that a woman living in the building has been infected by something unknown. After a few of the residents are viciously attacked, they try to escape with the news crew in tow, only to find that the CDC has quarantined the building. Phones, internet, televisions and cell phone access have been cut-off, and officials are not relaying information to those locked inside. When the quarantine is finally lifted, the only evidence of what took place is the news crew's videotape.

Download Quarantine in Digital HD/4K from the iTunes store. 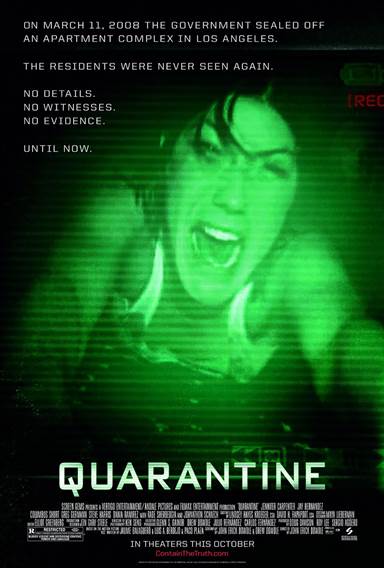 The story behind Quarantine is brutally simple: something--some disease--breaks out in a low-rent building in Los Angeles. It just so happens that a film crew shadowing a fire department team is trapped inside when the government quarantines the building.  For the people inside, it is a zombie-style nightmare as the disease leads to violence!

The movie is told purely "out of the lens of the camera" which, as with all these movies, keeps running after any normal person would've thrown it out. It has to...until the end.

I have seen several of these now, The Blair Witch Project, Cloverfield, and Diary of the Dead.  I can now appreciate the genius of the first of them, The Blair Witch Project.  Faced with limitations of the "real" camera view, they need to spend at least part of the time showing things that are not relevant in order to create the verisimilitude effect.  While this gives us a thrill of "the real", it also means we spend some time looking at people's feet!

In The Blair Witch Project, the action was centered on the characters. They were, literally, coming after them. In the other movies, people just happen to be there which means less of the action is directly relevant to them; In Cloverfield, it is happening to the whole city; in Diary of the Dead, to the whole world. The film crew in Quarantine isn't exactly passive as much as irrelevant. Yes, the people with the camera must survive, explicitly, until the end of the movie; but they are not the cause or focus of the action.  If the movie was not limited to the single camera, we might see people in the response team, friends of those trapped in the building (who are outside), and so on.

But we can't see that; all we can see is a single linear narrative which must unfold the story to us in limited angles with low light. The movie sort of has a plot, even giving us some reveals towards the end that provide what might be an explanation.  It exchanges moderately predictable opening scenes of mounting tension for a blitzkrieg-paced ending with lots of "boo" moments.  It's an effective thrill ride, but it lacks some of the elegance of The Blair Witch Project's singular focus.

In the end, I have to give the movie credit for not explaining things too far.  The movie provides many strong clues that do not leave us "metaphorically" entirely in the dark (rather, like the literal camera work, we are simply left mostly in the dark); but it, intentionally, explicitly misses a chance to explain everything to audience members who aren't trying to keep up. The original work Quarantine is based on a Spanish language film, but apparently did have a reveal scene around a tape player.  I have a respect for movies that do not treat the audience as if they were children. On the other hand, we were shown the end-scene in the trailer which wasn't welcome to me as a moviegoer who would've liked some ambiguity as to how things would turn out.

Finally, I understand the definitive zombie book, World War Z, is in production.  Quarantine could, in a lot of ways, be a 'teaser trailer' for it. There are some similarities to the way Quarantine begins and the way World War Z starts.  Zombies, whether plague, chemical, or "the just-plain-unexplained-walking dead are here to stay. Quarantine, although not bursting through the upper-crust top-soil of the zombie movie graveyard isn't way at the moldy bottom either.  It is more credible than Diary of the Dead and not quite as scary (or, thankfully, nausea inducing) as Blair Witch.  It's a credible effort if you are into that, and you won't like it a bit if you are not into that.

A Note on Rating: I give this movie high marks for being effective in its sense of claustrophobia and true to its idea.  Where Diary of the Dead ditched its single-camera view for a more polished visual experience, Quarantine does not. That takes nerve. However, the result is a great deal like the night-sight scenes in 28 Weeks Later.  In that we saw a lot of frantic action, but couldn't see it all that well.  Quarantine is a haunted-house thrill ride, but its light on story telling and character. It does its best, but it is simply too fast-paced to really give us character arcs. I found it to be a somewhat unpleasant experience even while admiring the execution of its vision.