Download Sherlock Holmes in Digital HD/4K from the iTunes store.

Listen to the Sherlock Holmes soundtrack on Apple Music.


Sherlock Holmes Sequel Already in the Works?  29/09/2009 21:29 EST
Risky Business Blog has announced that there is already a sequel in the works for the upcoming "Sherlock Holmes" film. Due out in December, the film will be starring Robert Downey Jr. as Sherlock Holmes, Jude Law as Watson and Rachel McAdams as Irene Adler. The film is directed by Guy Ritchie and is said to be a more "amped up" and action packed version of the classic Sir Arthur Conan Doyle novels...  More>> 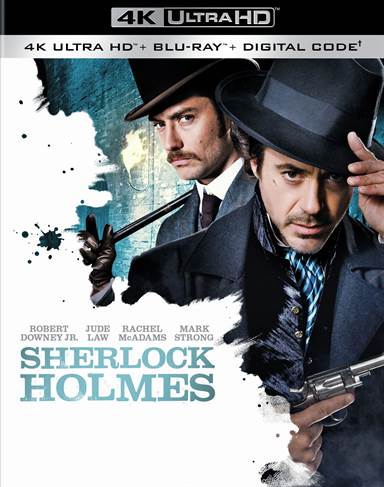 There are some characters that are completely unforgettable and who endure the test of time.  In 1887, author Sir Arthur Conan Doyle created one such man…Sherlock Holmes.  The egotistical, private detective came to life through stories written by Doyle but has transcended time to adapt to other media.  While not the first detective introduced in literature, he is arguable the most well-known.  By the 1990s there were already over 25,000 stage adaptations, films, television productions, and publications featuring Holmes.  Then in 2009, Robert Downey, Jr. (Iron Man) took up the mantle in the Guy Richie directed film, Sherlock Holmes.

As this version opens we see Holmes and his trusted partner, Dr. John Watson (Jude Law; The Talented Mr. Ripley) foiling a plot by Lord Henry Blackwood (Mark Strong; Kingsman: The Secret Service), who is ritualistically murdering innocent women.  Three months later, Watson is preparing to marry and move out of the home at 221B Baker Street, which he and Holmes share.   While he has enjoyed his adventures with Holmes, he is looking forward to more stability.  At the same time, Blackwood requests to see Holmes and warns him of 3 more deaths to come, which he says Holmes won't be able to stop.  Blackwood is them hanged for his crimes.

As sightings of Blackwood are reported, Holmes and Watson visit his grave to find it destroyed leading some people to believe he had risen from the dead.  Meanwhile, Holmes is visited by his former adversary, Irene Adler (Rachel McAdams; The Notebook) who is now working for a dangerous and mysterious man.  She asks Holmes to find a scientist named Luke Reordan (Oran Gurel) who created a machine that Blackwood intends to use to kill the members of Parliament. When Holmes figures out Blackwood's plan, he, Adler, and Watson find the machine in the sewer and save the politicians.  As a parting goodbye, Adler tells Holmes her employer is named Moriarty and he should not be underestimated.

The first thing one notices when viewing this film is director, Guy Richie's personal style that is uniquely his.  He loves slow-motion moments and unusual angles, which, in this case, gives a period piece a somewhat modern feel without losing the integrity of the story.  Downey Jr. and Law are perfect as the famous sleuth duo.  They have easiness to them and banter that makes it believable for them to have been friends for years.

The film is presented in 2160p, upscale 4K video with a 1.78:1 aspect ratio giving it a sharp picture that highlights the details. The color palette is mostly muted tones but every so often there is a pop of color that stands out.  Interestingly the audio is only DTS-HD master audio 5.1, and while the quality is very good, I wonder what it would have sounded like in Dolby Atmos.  The extras can be found on the Blu-ray disc., and include the cool feature called "Maximum Movie Mode," which allows director Guy Ritchie to walk onto the screen to chat about the film. There are also eight featurettes that run a total of 31-minutes. A basic making-of featurette titled Sherlock Holmes Reinvented runs 15-minutes.

Sherlock Holmes is an intriguing character with a fascinating talent for using science, logic, and keen observation to solve crimes.  Because of this talent, he is often depicted as being rather cocky and self-assured.  He also exudes an air of intelligence and can easily become bored with others.  Based on this description, Downey, Jr. is the perfect casting choice who manages to bring a somewhat lackluster script to life.

Richie's interpretation of Sherlock Holmes is interesting and entertaining and fans of the fictitious private investigator would be remiss to not pick up this 4K combo pack.