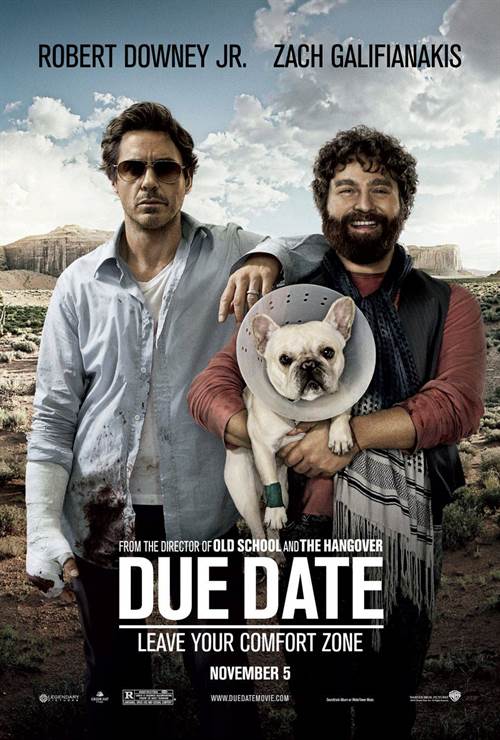 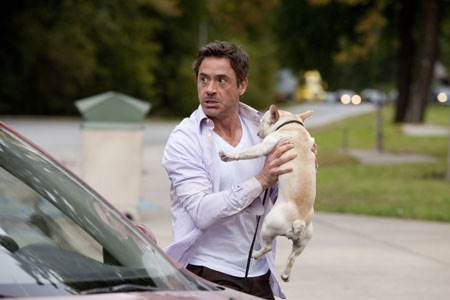 Peter Highman (Robert Downey Jr.) is an expectant first-time father whose wife's due date is a mere five days away. As Peter hurries to catch a flight home from Atlanta to be at her side for the birth, his best intentions go completely awry when a chance encounter with aspiring actor Ethan Tremblay (Zach Galifianakis) forces Peter to hitch a ride with Ethan--on what turns out to be a cross-country road trip that will ultimately destroy several cars, numerous friendships and Peter's last nerve.

Stream Due Date in Digital HD/4K from the AppleTV store.

Due Date images are © Warner Bros.. All Rights Reserved. 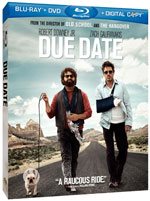 Due Date stars Robert Downey Jr. and Zack Galifianakis as two road companions on the worst possible trip in history. For anyone who was born before the 1980's it will bring up memories of Planes, Trains and Automobiles. Unlike that film though this film feels the need to up the crazy quotient by 100%; perhaps it's indicative of the times we live in.
Downey's character, Peter Highman, is your typical neurotic, obsessive, rigid straight man that obviously has many personal issues stemming from his childhood. When we are introduced to him he is leaving a voicemail for his pregnant wife shooting down her choices for baby names. On his way to the airport to head back to L.A. he has an odd encounter with a stranger, unbeknownst to him their bags get switched and while in the security check he makes this discovery. Thankfully he makes it onto the plane somehow and once again finds himself bumping into the same stranger. A misunderstanding winds Peter in the security office of the airport and on the "no-fly" list. Because his bag is still on the plane he doesn't have his wallet.
The same stranger, who introduces himself as Ethan Tramblay (Zack Galifianakis) offers to drive Peter to L.A. since he was responsible for getting him kicked off the place. Reluctantly Peter agrees and off they go. Ethan is the type of person who can't seem to keep from talking incessantly and asking the most personal of questions. Naturally not the kind of person you want to go on a road trip with but just the right person to drive Peter crazy. We learn that Ethan had been in Atlanta for the death of his father and has decided it is his destiny to become an actor. Of course his way of doing things does not mesh with Peter's regimented and orderly personality.
As they make their way many obstacles arise that keep delaying their trip; all of which are the doing of Ethan, even if he does not know it. From drug deals, spending all their money, insulting war veterans, falling asleep at the wheel, insinuating Peter's wife is having an affair, to getting them arrested by border control, Ethan seems born to cause problems for other people and yet still seeing the silver lining in any situation. While this film is billed as a comedy there are tiny moments of drama that pop up throughout the movie. Instead of adding an element of depth to the characters it just slows the movie down. Even the comedy in the film rarely does what it sets out to, most of the jokes are physical humor and what should be a funny character in Ethan Tramblay comes off just more aggravating than anything else.
Again, there are a lot of comparisons that can be made here to the 1980's film Planes, Trains and Automobiles but that aside this film on its own just doesn't have the same depth of character that came that film. Here the characters are just both so out of their minds that you barely get the sense of any humanity in them at all. Downey Jr. is a good actor and capable of great depth as well as comedy, just look at Tropic Thunder; but here there just isn't enough to work with for either of them to make this film the fun experience it should be.
It has arrived on Blu-ray DVD now, delivering the standard visual and audio treatment we've come to expect from this format. Given this is a comedy there isn't much to do in either of those respects. There are some good extras that come along with it, like a scene from the sitcom Two and Half Men starring Galifianakis as Ethan Tramblay, additional scenes, a compilation of all the physical comedy from the film and a mash up of all the questions Ethan could come up with and finally a gag reel. All in all a fairly standard set of extras for a film that was fairly standard itself.