Adapted from the classic novel by Margaret Atwood, The Handmaid's Tale is the story of life in the dystopia of Gilead, a totalitarian society in what was formerly the United States. Facing environmental disasters and a plunging birthrate, Gilead is ruled by a twisted fundamentalism in its militarized ‘return to traditional values'. As one of the few remaining fertile women, Offred (Elisabeth Moss) is a Handmaid in the Commander’s household, one of the caste of women forced into sexual servitude as a last desperate attempt to repopulate the world. In this terrifying society, Offred must navigate between Commanders, their cruel Wives, domestic Marthas, and her fellow Handmaids – where anyone could be a spy for Gilead – all with one goal: to survive and find the daughter that was taken from her.

Download The Handmaid's Tale in Digital HD/4K from the iTunes store.

Listen to the The Handmaid's Tale soundtrack on Apple Music.

The Handmaid's Tale images are © MGM Studios. All Rights Reserved. 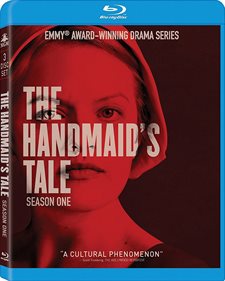 In 1985, Canadian author Margaret Atwood published her dystopian novel, The Handmaid's Tale.  The controversial story is set in New England and focuses on Offred, a handmaid who is suppressed in a totalitarian Christian society that has overthrown the United States Government.  While often banned over the past 30 plus years, the book has become required reading in high schools throughout America.  It also has been the final, open-ended question on the Advanced Placement Literature exam for a number of years.  In 2017, Hulu decided to make the story into a 10-episode television series that has won critical acclaim as well as several Emmy awards.  With Season Two beginning on April 25, 2018, Season One is now available on Blu-ray, DVD, and Digital HD.

Offred, or "of Fred" (Elisabeth Moss; Girl, Interrupted), is basically a slave used for procreation.  She serves the wealthy government officials whose wives are considered to be barren.  In her former life, Offred had a husband and a daughter and she hopes one day to return to them.  In order to do that she must remain subservient while secretly plotting ways to help the resistance called Mayday.  Unfortunately, those found aiding the group are hung and Offred has seen other handmaids fall to this fate.

Meanwhile, we see flashbacks to Offred's former life and her husband Luke (O-T Fag Benie; As If) and daughter Hannah (Jordana Blake; Star Trek: Discovery). Luke has escaped and Hannah remains safe as long as Offred, who is now pregnant, cooperates.  Interestingly, her Master – Commander Fred Waterford (Joseph Fiennes; Shakespeare in Love), who maybe sterile, believes the baby is his while it could really be his security's, Nick (Max Minghelia; The Social Network), baby.  During all this, Offred begins to help the resistance and watches the various fates that befall her fellow handmaids.

With twelve Emmy nominations and eight wins, Hulu clearly has a major hit on its hands. Both critical acclaim and positive audience reaction fuel this drama onto bigger and better heights.  The bleak outlook for Offred and the other handmaids along with the cruelty of the Aunts and the Commanders' wives give the show the tension that makes for gripping television.  One wrong word could have serious, potentially dire, consequences.  With this idea beautiful put to paper, the cast and crew bring Atwood's literary vision to life in the most striking way.

Moss is magnificent as the title character.  Her constant emotive facial expressions make the audience sympathize with her on a grand scale. Part of this level of acting on her part is possible because of her peers. Fiennes and Minghelia are both solid in their roles and the chemistry between the latter and Moss make their partnership believable.  Yvonne Strahovski (Dexter) offers the audience a conflicted character and of course, Ann Dowd (The Manchurian Candidate) as Aunt Lydia is remarkable and gives us a fantastic villain to hate. Alexis Bediel has come along way from her teenage angst years on Gilmore Girls and with this show proved herself to be a very capable actress.

The Season 1 Blu-ray is the standard 1080p high definition video quality with a 1.78:1 aspect ratio.  Since the show has a high production value the picture certainly isn't lacking, as the level of detail is excellent.  With a purposefully dark and dreary color palette the colors that are evident stand out beautifully.  The DTS-HD Master Audio 5.1 is strong as it spreads across the speakers.  There are only two extras, which are a little disappointing. They include "Script to Screen" and "Hope in Gilead".  Both are interesting, informative and definitely worth watching.

Very well written, acted and produced, the show definitely showcases some of what is great about television these days.  It will be interesting to see how the creator and writers of The Handmaid's Tale keep the momentum they built in Season One.