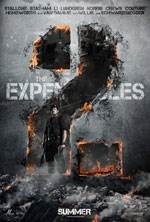 Sylvester Stallone has confirmed that "Expendables 2" will have an "R" rating. This announcement comes after much speculation, and outrage, that the film would be tagged with a "PG-13" rating. It was also said that the teen friendly rating was pushed by cast member Chuck Norris.

Stallone recently told StalloneZone that "after taking in all the odd rumors and hearsay, Expendables 2 is an R."  He was said to be furious with all the talk about the rating being lowered from the original film's "R" rating.

This rating is only according to Stallone, however. The MPAA has yet to give their official rating. The film is said to be as action packed as the original.