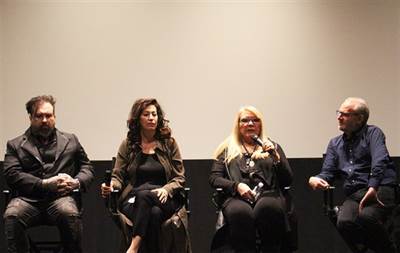 The Hunger Games series was not just four films; it was an experience. That is never more clear than when watching the behind the scenes features on The Hunger Games: Mockingjay - Part 2 Blu-ray.

At a sneak preview of a few of the extras on the Blu-ray (available on March 22) director Francis Lawrence and make-up artists Ve Neill, Glenn Hetrick, and Nikoletta Skarlatos were on hand to talk more about the making of the film.

First the extras. Three portions of the 8-part documentary Pawns No More: Making The Hunger Games: Mockingjay - Part 2 were featured.

"Walking Through Fire (Concluding the Saga)" provides an in-depth discussion about the evolution of Katniss Everdeen. Cast and crew examine how the character progressed from a girl who wants to save her sister to a young woman seeking revenge and, eventually, to a patriot fighting for a cause greater than herself. Much high praise is also given to The Hunger Games' author, Suzanne Collins, for her vision and help with bringing the book to life on the screen.

"From Head to Toe (Costume, Make-up and Hair)" put the spotlight on the incredible group of artists who brought the glamour and horror for The Hunger Games to life. The make-up team was very aware of the PG-13 rating they were chasing. Much of the make-up and effects for the injuries were toned down to stay within the ratings' guidelines.

A few fun bits of trivia were also dropped. Annie Cresta's wedding dress was made from the same material as the jumpsuits worn by citizens of District 13, reiterating the idea that the people of 13 have limited supplies on hand. Also, President Coin's wardrobe and make-up evolved to mirror her change in character. In Catching Fire she wears a gray jumpsuit and no visible make-up, the same as everyone in 13. As she becomes more of a political player, her appearance becomes less drab and her costume lightens in color. At the end of Mockingjay - Part 2, she looks far more militaristic in a very light shade of gray meant to indicate how close she is to President Snow's preferred color: white.

Perhaps most moving was the final portion of the documentary, "A Different World (Reflections)." The final day of principal photography was especially emotional as the scene being filmed was originally intended to feature Phillip Seymour Hoffman as Plutarch. However, he did not complete the scene before his death in 2014. Instead, Haymitch reads Katniss a letter from Plutarch. One year later, a small crew completed the last day of filming: the epilogue where we see Katniss and Peeta with their children. Eagle-eyed viewers should notice the scene takes place in the same spot where Katniss and Gale once contemplated running away. Jennifer Lawrence's nephews played her children and there is a hilarious sequence of the crew trying to get baby Theo to wake up for the shot.

The documentary end with a beautiful retrospective of all of the films and a final sequence pays tribute to every actor, including those with very minor roles. As for more Hunger Games films to come, Woody Harrelson said if they decided to make more, he would be there for "all 56 sequels." For Lawrence, who won an Oscar in between filming the movies, she has always felt as though making The Hunger Games was like coming home and she'll miss that most. "She's gotta write more books!" Lawrence exclaimed, speaking about Collins.

During a Q & A following the presentation, director Francis Lawrence and make-up artists Ve Neill, Glenn Hetrick, and Nikoletta Skarlatos elaborated on the creation of the film series. Beyond what we see in the film, make-up and prosthetics were often done simply to help drive home the tone on set. Hetrick said prosthetics were applied to even for extras not in the shot so that the environment felt as real as possible for the actors.

The artists noted it is unusual in their competitive business to work in such easy harmony but they collaborated with one another seamlessly. Hetrick put it this way: "You don't often come out of something that big saying, ‘That was fun. Let's do that again.'"

One of the biggest challenges for all four was to "find the line to ride where we can feel the impact of the violence as much as possible and stay within PG-13." To that end, Lawrence chose to focus more on the thematic elements of the violence rather than the blood and gore itself. Neill said there's even a specific color of red for the blood they needed to find because some shades, such as bright red, are not allowed in PG-13 films. But in the end they wanted to get everything right so that the effects would not be edited or removed in order to meet the PG-13 rating.

Everyone noted time and again the familial feeling on set. Neill, a three-time Academy Award-winner, was particularly moved by making the films and seeing the behind the scenes features. "To watch these kids grow up was really a special thing," she said, trying and failing to keep herself from crying.

Lawrence echoed this sentiment saying he needed time to re-energize before doing a new project. He completed Catching Fire and both parts of Mockingjay in about 18 months, a near superhuman feat. It was well worth it. The three make-up artists, and everyone featured in the documentary, praised the director for his ability to articulate his vision for the film and for bringing it to life. "You had Francis at the helm," Skarlatos said simply. "You can't get any better."