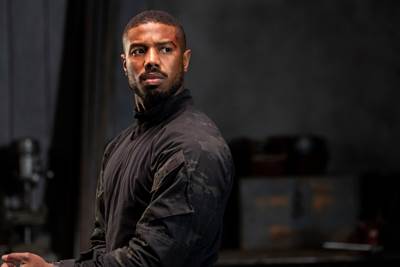 Originally published in 1993, Tom Clancy's Without Remorse became an instant bestseller and offered fans of the "Ryanverse" an origin story of John (Kelly) Clark (Michael B. Jordan; Black Panther).  Over twenty-five years later, this novel has finally been adapted into a full-length movie.  While first produced by Paramount Pictures for a theatrical release, Amazon Studios acquired the rights allowing the film to premiere on their streaming platform, Prime Video.  In anticipation of the movie's debut, the director, Stefano Sollima (Sicario: Day of the Soldado), and the cast appeared in a video press conference to discuss their characters, the physical training, and how a global pandemic has affected the film industry and streaming services.

Addressing the latter topic, Star and Producer of Without Remorse, Michael B. Jordan stated, "I think it's given access to films that quite possibly they wouldn't have an opportunity to go see…I think certain films are shot and intended to be played in a movie theater…We were a victim of [the pandemic] as well. How were we going to get our movie out to the masses so everyone would have an opportunity to watch it?"  He also expressed how everyone had to shift and even [Without Remorse} had to find a way to "pivot".  Predicting the future, he opined, "I think it is going to be a healthy balance between the two (movie theaters and streaming services)".

Moving on to talk specifically about Without Remorse, Sollima, having been a war zone camera operator, was able to bring a certain experience and expertise to the film.  "When you work in a war zone area there is a responsibility to report the reality in a truthful and a respectful way…you cannot dirty the reality with your own point of view.  You do not want to judge what you are going to experience.  It is up to the audience…"

For Jordan, this was also the first time his company has produced an action film.  "It was a very hands-on way to build out stunts and to be a part of the process. Working with more experienced producers…it was a learning curve…I walk away from this movie with more knowledge of how to put those sequences together."

Besides the emotions, Turner-Smith elaborated on the physical aspect of her role, "First of all I was pregnant at the time, so that definitely added a level of intensity that even I didn't anticipate…what was required of me physically while carrying the baby and doing this film is unlike anything I've ever experienced."  She continued, "It was intense. I worked with a trainer…"

When asked about doing his own stunts, Jordan smiled while he spoke, "It was fun, I'm a little action junkie…These are the movies I watched as a kid and that I always wanted to be in, so the fact that I actually got to train and do most of my own stunts…it was fun, we got banged up throughout the process, but it was so worth it.

Spartacus: War of The Damned