"Downton Abbey: A New Era" has new beginnings and sad endings, as well as steady continuations of the family dynasty. It's an absolute must-watch for any fan of the franchise. 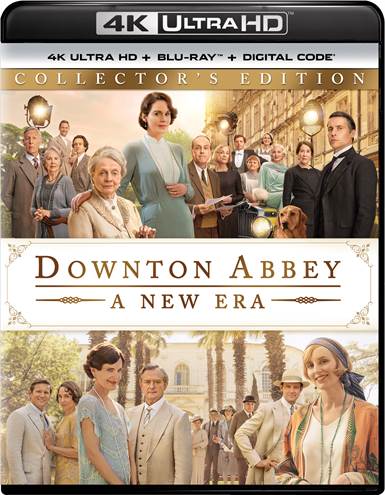 From January 2011 until December 2015, American audiences turned on their television sets to watch the period drama, Downton Abby.  Examining the social class differences in 1920s England, the show ran for six seasons and had five "specials" and two movies.  The second film, Downton Abbey: A New Era is available for purchase on 4K and Blu-ray this week.

It's 1928 and the family is celebrating the nuptials of Tom Branson and Lucy Smith. This new exciting chapter of their lives comes in conjunction with the inheritance that Violet Crawley receives - a villa in France. Curious about this generous gift, the family tries to gently uncover just why the deceased Marquis de Montmirail bequeathed such a gift. Could they have been lovers? Is her son Robert not who we think he is? As Robert, Cora, Edith, Bertie, Tom, Lucy, and Maud set off to inspect the villa (along with Carson, Bates, and Baxter), the family at home is dealing with another incredible situation - a movie shoot at Downton.

A director propositions Robert and Mary about filming at the estate and paying a hefty sum to do so. With repairs and expenses piling up, they decide that they simply cannot pass up such an offer. They agree to the filming and look forward to having the ability to replace their badly leaking roof. However, what begins as an inconvenience becomes quite a lesson for Mary and the others, as they learn new things about themselves and find they are tested along the way.

I was originally put off seeing this film's trailers; I thought they made it look a bit goofy and over the top. I went in not expecting much, and boy, was I wrong. I wound up enjoying the film more than the first, as it really dealt with the lives of the characters as the series did. The first film was very much about the King and Queen's visit, with little character development. But in "Downton Abbey: A New Era", it was like watching a 2-hour long tv episode. We got to see the development of the relationships of the characters and where they are personally in their lives; for better or worse.

The veteran cast is, as usual, superb in their roles and the newcomers added some extra oomph and style to the film and helped bring out the best in what this franchise really is - a story about people who share their lives - family, blood and otherwise. This installment was particularly touching for so many reasons. We have new beginnings and sad endings, as well as steady continuations of the family dynasty. It's an absolute must for anyone who followed along with all the characters that lived under the Crawley's roof, and an incentive for others to begin their Downton journey.

Visually, this film is a treat for the eyes. The filming and storyline that takes place in the South of France allows for more vibrant colors in the scenery as well as the costumes. A beautiful light airiness is seen, even in the England scenes. The summer weather allows for a breezy feeling throughout.
Of course, this is all enhanced by the 2160p video quality and 2.39 aspect ratio.  The surroundings are detailed and the costumes are clear and clean.  Complimenting the video is an equally detailed audio track recorded in Atmos.  Dialogue is crisp and the soundtrack in the background is robust and offers depth.  Along with this film, there are some extras that are more than worth the watch. They are:

In closing, I cannot recommend this film enough! It was a touching, funny, warm visit back with one of our favorite families and the people they share their lives with. I really didn't want it to end, and I am hoping that they do another; however, as the Dowager Countess says, "We don't always get out just desserts."

Download Downton Abbey: A New Era in Digital HD/4K from the iTunes store.

Listen to the Downton Abbey: A New Era soundtrack on Apple Music.

For more information about Downton Abbey: A New Era visit the FlickDirect Movie Database. This release has been provided to FlickDirect for review purposes. For more reviews by Maureen Buccellato please click here.