Lightyear is not only an entertaining film that both children and adults will enjoy, but it is interesting to learn the beloved character’s backstory. 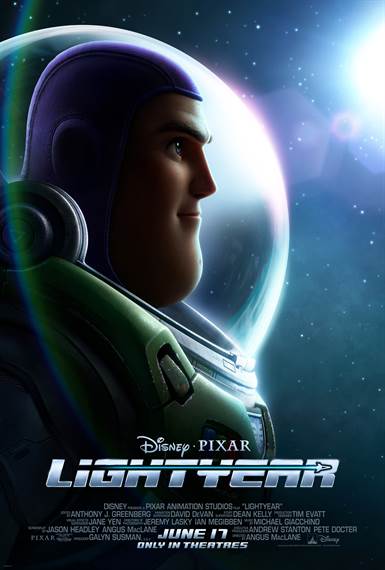 "To infinity...and beyond!!" That phrase, which has now become part of our everyday vocabulary, was first uttered over twenty-five years ago, in an animated feature film called Toy Story.  Spoken by Buzz Lightyear (Tim Allen; The Santa Clause), those four little words forever ingrained the cute toy in our hearts forever.  Over the course of the movie and its three sequels,  we have watched Buzz fight and work with Woody (Tom Hanks; Cast Away) and Andy's other toys, as he explores, learns, and finally accepts that he too is, in fact, a toy. But where did the idea for that toy come from? Almost thirty years later, we finally have the answer as the Disney/Pixar movie, Lightyear, opens in theaters on June 17, 2022.

Space Rangers Buzz Lightyear (Chris Evans; Avengers: End Game) and Izzy Hawthorne (Keke Palmer; Hustlers) divert their voyage home to check out a mysterious, seemingly uninhabited, planet.  Once they have landed and leave their craft to explore, they find vines that are alive and that are trying to suck them underground. Watching, as their ship is slowly entangled in the vines, they race back and manage to break free and lift off.  Unfortunately, Buzz doesn't clear the mountain and they crash land back on the planet, destroying their fuel source.  Stranded, Hawthorne and Lightyear spend the next several decades trying to create more fuel in an attempt to get home.

Whoever decided that Evans should voice the lead character, was a genius.  He sounds similar to Allen who originated the voice and he has great tonal inflection using his voice to express his feelings whether the scene calls for anger, humor, or melancholy.  Palmer, who was a Nickelodeon sitcom star in the mid-2000s, has a maturity in her voice that lends itself to portraying an elite space ranger.  The banter Evans and Palmer share comes across as warm and believable.

There isn't anything bad that can be said about the technical aspects of Lightyear nor would one expect there to be.  Disney/Pixar films are always precise as far as animation goes with pure black tones and ample color hues.  Nothing bleeds over so lines are sharp and details are clean. The audio is also well done giving the audience a full and robust experience. The script, for the most part, is witty, logical, and endearing. The plot is interesting but the third act sort of loses momentum leading to an ending that simply kind of fizzles out.

Nowadays movies and television shows generally come with some sort of marketing campaign and merchandising so studios can generate more profits.  However, this is probably the first time a movie about merchandising preceded the actual movie that spawned said merchandising.  That isn't to say Lightyear won't have its own merchandising.  I know several people who have already bought Sox stuffed animals and Sox talking toys.  I also wouldn't be surprised if there were numerous Lightyear and Hawthorne costumes roaming the streets this Halloween.

Lightyear is not only an entertaining film that both children and adults will enjoy, but it is interesting to learn the beloved character's backstory.  Sadly, I think I now have more questions than I did before seeing the movie...the vines and flying creatures are never explained, how did they find resources to survive on the planet, and why didn't the Buzz Lightyear action figure in Toy Story come with a Sox personal companion toy, etc. I can also say I don't think anyone who has ever been on the Buzz Lightyear ride at DisneyWorld will ever look at it the same way again.  For me, I think it will be a whole new experience and I can't wait to ride it again with my newfound knowledge.

So pack up the family and head out to the movie theater. Lightyear is, simply put, good, family-friendly, summer entertainment.

Listen to the Lightyear soundtrack on Apple Music.