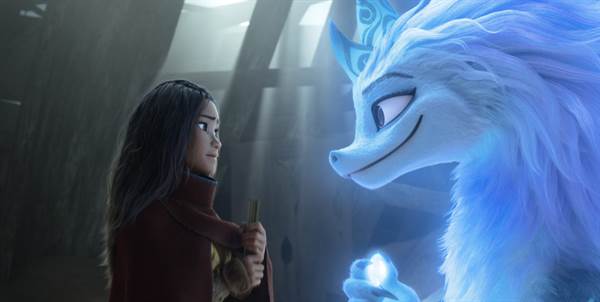 Long ago, in the fantasy world of Kumandra, humans, and dragons lived together in harmony. But when an evil force threatened the land, the dragons sacrificed themselves to save humanity. Now, 500 years later, that same evil has returned and it’s up to a lone warrior, Raya, to track down the legendary last dragon to restore the fractured land and its divided people. However, along her journey, she’ll learn that it’ll take more than a dragon to save the world—it’s going to take trust and teamwork as well. From directors Don Hall and Carlos López Estrada, co-directors Paul Briggs and John Ripa, producers Osnat Shurer and Peter Del Vecho, and featuring the voices of Kelly Marie Tran as Raya and Awkwafina as the last dragon Sisu.

Listen to the Raya and the Last Dragon soundtrack on Apple Music.

Raya and the Last Dragon images are © Walt Disney Pictures. All Rights Reserved. 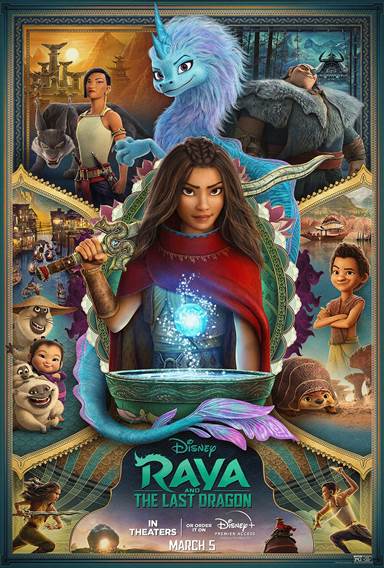 Diversity has become a common topic for discussion in the entertainment industry.  From "whitewashing" of award nominees and casting movie/television roles with actors of different ethnicities than the characters they are supposed to be portraying.  As such, the country is seeing a shift towards more conscious and varied characters/stories/music in an effort to create awareness and acceptance of those who are different from ourselves.  Walt Disney Studios is one such entity that has embraced this idea.  In recent years they have created animated films such as Coco and Moana, highlighting Hispanic and Polynesian cultures, and this month they offer audiences their latest film – Raya and the Last Dragon, bringing Asian beliefs to viewers through movie theaters and their streaming network, Disney+.

Five hundred years ago, in the land of Kumandra (a made-up place said to represent the Southeast Asian countries of Laos, Thailand, Cambodia, Vietnam, etc.)  Humans and Dragons lived together in peace.  However, creatures called Druuns wreaked havoc, turning people into stone statues.  In order to stop the Druuns, the dragons sacrificed themselves and turned to stone. The lands broke apart with Heart taking the magic crystal and keeping it safe.

In an effort to reunite the lands, Heart Chief, Benja (Daniel Dae Kim; Lost) invites the chiefs together in order to find a peaceful resolution but instead is betrayed by Fang Chieftess, Virana (Sandra Oh; Killing Eve), causing a fight between them all which ends with the magical crystal breaking apart, and the Druuns once again returning.  Several years later, Raya (Kelly Marie Tran; Star Wars Episode VIII: The Last Jedi) travels the lands in search of the last dragon, Sisu (Awkwafina; Crazy Rich Asians) in order to save her father and reunite Kumandra.  However, Virana, in an effort to become Chieftess of Kumandra, sabotages Raya's efforts and puts all of the lands at risk.

The film has some fine actors lending their voice talents.  Tran gives Raya a softness and sweetness while portraying her as a skilled warrior.  Awkwafina has a distinctive voice and a gift for humor while infusing Sisu with a purity that warms one's heart.  Kim is Raya's stern yet loving and trusting father.  Oh plays Virana with a strength and tenacity that she often brings to roles.  The rest of the cast, which includes Benedict Wong (Doctor Strange) and Gemma Chan (Crazy Rich Asians), are terrific as well, offering well-rounded and talented actors.

As one would expect from Disney, the animation is incredible, and the storyline is fun.  The range of colors throughout the movie is spectacular and Sisu, in dragon form, is drawn with an incredible amount of detail.  Interestingly, the music takes a back seat and there are very few memorable, musical moments.  However, the flavor of the soundtrack certainly enhances the overall mood and feel of the film.  True to form, the movie also has a few adorable characters including an armadillo/pill bug creature named Tuk Tuk (Alan Tudyk; Dollhouse).

Raya and the Last Dragon offers a terrific cast, a few laughs, beautiful visuals and audio, some action scenes, an element of "cuteness" and a subconscious message of trust and inclusivity that will be enjoyed by audiences of any age.

Of course, the movie isn't without controversy, as half the cast is of Eastern Asian heritage but not from South-Eastern Asian countries and many take offense to the casting choices.  If you are looking for an ethnically correct movie, you won't get all you are looking for from Raya and the Last Dragon but if you want a "fun for the whole family type of movie", Raya and the Last Dragon fits the bill.