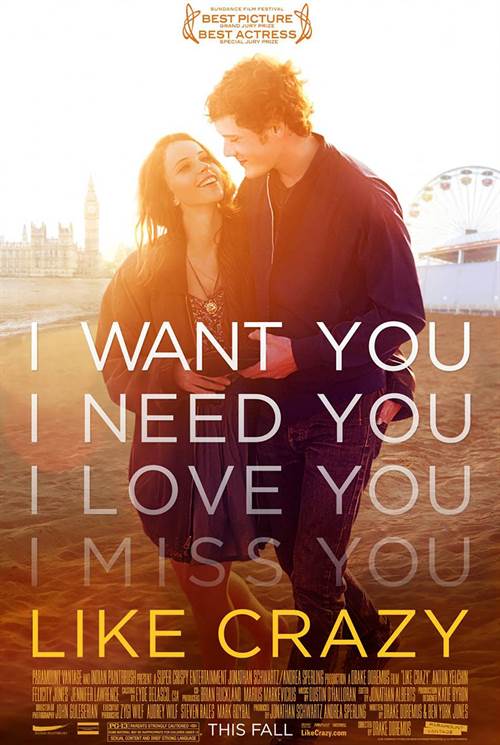 While attending college in Los Angeles, Jacob (Anton Yelchin), an American, and Anna (Felicity Jones), who hails from London, fall madly in love. However, the young lovers are forced apart when Anna violates the terms of her visa and must return to England. Jacob and Anna discover the difficulties of maintaining a long-distance relationship in the face of their changing lives. Yet, no matter how often circumstances pull them apart, they always find themselves back together again.

Stream Like Crazy in Digital HD/4K from the AppleTV store.

Like Crazy images are © Paramount Vantage. All Rights Reserved. 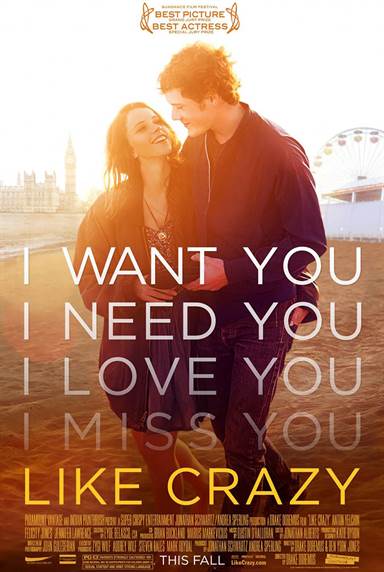 How to screw up your life without really trying seems to be the theme of the film Like Crazy an inconceivable little film that's poorly written and delivered.  Even with heartthrobs Anton Yelchin and Felicity Jones, the predictable unlikely plot just kills any chance for a dramatic winner.

Writer director Drake Doremus centers his film on Jacob (Yelchin) and Anna (Jones) two college students who are about to graduate when they meet.  After a quick romantic interlude, the two decide to spend the summer together before going on to their chosen professions.  One problem, Anna is a British subject in America on a student visa and since she graduated must return to England.  But, the whimsical Anna chooses to be with Jacob for the summer turning her nose up at ‘immigration'.

Following an amazing summer together, Anna returns to her parents in England to try and figure out her life.  After some long distance romance, Anna returns to America only to get rejected due to violating her student visa and gets sent back to England.  So starts a complicated relationship that mixes marriage, unfaithfulness and a whole lot of sex.

Although Doremus sets up a great theme to work with, he fails to instill any chemistry between his characters, provide a realistic script in a reasonable time frame and chooses (like his Anna character) to believe the audience will accept all this in the name of love.  Well, NO! Anna and Jacob have found a special kind of ‘true' love in the first act that I accepted.  The moment Anna is out of the picture locked in London, however, Jacob starts to get sexually involved with Samantha (Jennifer Lawrence) while he builds his chair business.

Anna then convinces Jacob to join her in London and the two decide to get married thinking that would get her a Green Card.  The red tape bogs the couple down so Jacob returns to the United States to run his chair business and goes back to his sexual tricks with Samantha, etc…. leading to an unlikely ending. I could fill in the blanks but just in case you really want to go see Like Crazy, so you can moon over the two main actors, there's no reason to go any further.

As to Jones and Yelchin a suggestion, sweep this one under the rug and move on to another project.  From the looks of things on the screen, you probably already did this by the beginning of the third act.
Like Crazy is rated PG-13 for sexual content and brief strong language.